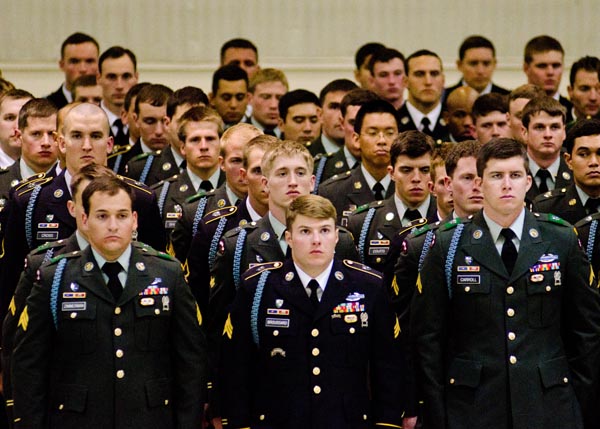 TACOMA, Wash. (USASOC News Service, May 15, 2012) – The U.S. Army Ranger story is typically a closed book, but Joint Base Lewis-McChord’s Rangers opened the pages of their latest chapter for an evening last week. The South Sound community had the rare opportunity to join 2nd Battalion, 75th Ranger Regiment, in recognizing its own at the Tacoma Dome, May 10.

More than 50 Rangers received commendations, which ranged from Army Commendation medals to a Silver Star for combat and non-combat action going back to 2005. The battalion also received two Valorous Unit awards for actions in Iraq and Afghanistan.

Since Sept. 11, 2001, 2-75th Rangers has deployed for Overseas Contingency Operations 14 times. Their most recent Operation Enduring Freedom deployment concluded in December. During the five-month rotation they conducted 475 combat operations where they lost four rangers and one attached Soldier.

Last fall, Keough, serving as a Ranger rifleman and squad leader, was part of a joint task force conducting a raid on a Taliban compound. When a comrade was injured during the assault, Keough positioned himself between the wounded Ranger and insurgent fire so that other task force members could administer medical aid.

After he and another teammate eliminated a charging insurgent, he was hit by enemy fire and still held his position between the enemy and his downed teammate as his squad radioed for a medevac. Refusing treatment throughout a long firefight, he continued his integral part of the mission, helping the team to overtake the enemy compound eight hours later. He also received a Purple Heart for the wounds he suffered during that engagement.

Lt. Gen. John F. Mulholland, commander of U.S. Army Special Operations Command, traveled from his Fort Bragg, N.C., headquarters for the event. He said to be a part of a night when so many Rangers were honored for heroic deeds was awe inspiring.

“That convergence — that range of valor is extraordinary,” he said, “and by itself should tell us what it means to be a Ranger, and to be a Ranger battalion.”

Seven Rangers received Bronze Star Medals with “V” devices for valor during the ceremony. Pfc. Joshua Overly, 24, was one of them. During a 2011 firefight, the Ranger rifleman drew enemy fire and eliminated the threat so that two injured troops could be safely reached and extracted.

The native of nearby Gig Harbor shied away from the “hero” label.

“I was just in a bad situation and I did my job; that’s what it boils down to,” he said. “Anybody in my unit could have been in the same exact situation as me and did the exact same thing.”

Overly said he was glad his family and friends could see his fellow Rangers, instead of just hearing his stories about them.

“(The ceremony) gave my family a sneak peek of the men that I’m surrounded by,” Overly said. “I could tell them on the phone that I’m in the company of heroes at all times — it means a little bit more for them to see it and hear it from somebody else.”

“(Our family) has used it as an opportunity to learn about our country’s history and the history of the world,” she said. “Seeing the work that my boys do now — the physical training, the mental training — it’s astounding the amount of hard work they do. It’s made me proud — proud of our country and all of the men and women in the military.”

Lt. Col. David Hodne, 2-75th Rangers commander, said the openness of the ceremony was a reminder that though Ranger operational missions are shrouded in security, it’s important to touch base with a public that might know the legend of the Army Ranger, yet never have the opportunity to shake his hand.

“The community is insulated from the Rangers when we’re only in our compound, and they are our biggest fans and supporters,” he said, “so when you talk about getting a perspective on what these great Rangers are doing, there’s no better way to do it.”

Hodne also said any benefit to the community was matched by appreciation from his ranks.

“After now more than 10 years of war, for families to celebrate amongst themselves — to do this in isolation — they’ve done that for years,” he said. “Over time it’s difficult to continue when you think you’re alone in your effort in fighting the war. These men get up every day and do the hard jobs — without complaint.”