A Run For Heroes, Inspired By A Son 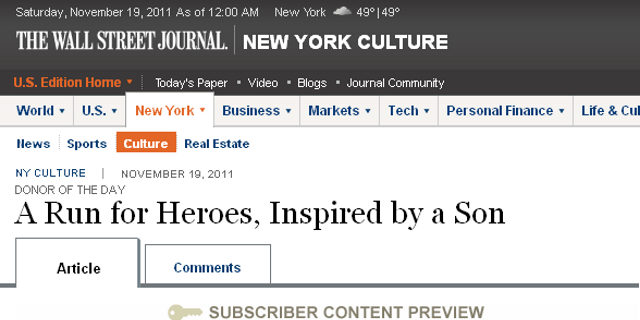 Jim Regan speaks to the Wall Street Journal about our 5th Annual ‘A Run Down Hero Highway’ and about his mission to provide support, beyond what the government can offer, for the U.S. Army Rangers and their families.

A Run for Heroes, Inspired by a Son

To James P. Regan, it’s a moral responsibility to give back to the U.S. Army Rangers who serve. It’s also a way to honor his son, Sgt. James J. Regan, a member of the 75th Ranger Regiment who was killed in Iraq in 2007.

Mr. Regan began his Manhasset, N.Y.-based Lead the Way Fund in 2007 to help U.S. Army Rangers who have been injured or who are currently serving and their families. He says the fund is on pace to distribute some $300,000 this fiscal year to help fill in the “gray area” of costs that the government doesn’t cover.

The organization raises about $500,000 in an average year through various events, including the annual “Run Down Hero Highway,” now in its fifth year, to be held Sunday in Manhattan.

Mr. Regan takes his inspiration to help Rangers and their families from the determination he saw in his only son who died at the age of 26. “Jimmy was an awesome kid,” says Mr. Regan, “a kid that walked the walk.”

The younger Mr. Regan was a graduate of Duke University. He turned down job offers to follow in his father’s footsteps and work in the financial-services industry. He declined a scholarship to attend law school.

Instead, he wanted to serve and then become a teacher like his mother, Mary Regan, who worked for the Port Washington, N.Y., school district. He planned to coach high-school lacrosse and football.

On Feb. 9, 2007, he died while on combat patrol in northern Iraq from injuries sustained when an improvised explosive device detonated near his vehicle.

It was an immense, traumatic loss, says Mr. Regan, but “instead of folding your tent, you have to meet the challenge.”

The Lead the Way Fund works with the U.S. Special Operations Command Care Coalition to exclusively provide support to U.S. Army Rangers, and the fund steps in when a Ranger is wounded or dies. The charity aids the soldier and family during recovery, helps to improve the quality of life for families and supports active soldiers through activities like pre- and post-deployment morale parties.

Whether it’s flying in family friends to attend a funeral, helping with a sick child while a soldier is away from home, providing a more comfortable bed for a wounded soldier or sending a “morale package” filled with new socks and magazines, the Lead the Way Fund helps when a need has been identified.

Much of the fund’s work is in helping families at home. “Essentially, it makes sense that if the government is not taking care of it, we try to help out,” says Mr. Regan.

“It comes down to this: If the wife and family is being taken care of at home, the soldier doesn’t have stress in the battlefield and he’s a better soldier.”