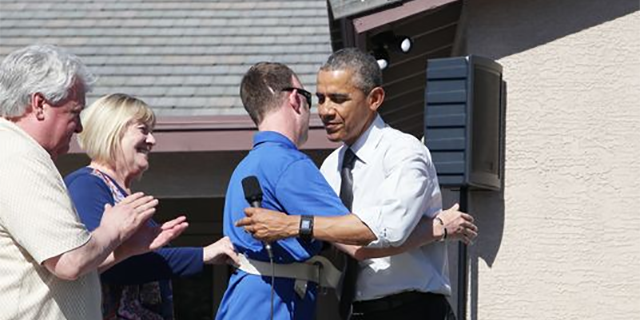 PHOENIX — It is an oddity in the life of Sgt. 1st Class Cory Remsburg that whenever President Obama visits the Phoenix area, there is a chance the two will visit.

The soldier and the president had met five times before Friday, with a sixth seeming almost inevitable given the confluence of the men’s schedules.

Obama was in Phoenix on Friday, visiting the Veterans Affairs hospital. That same morning, Remsburg was being handed the keys to a newly remodeled home in Gilbert, one that will help the partly paralyzed Army Ranger live independently.

At about 1:55 p.m., while Remsburg was enjoying a catered barbecue in his new backyard and breaking in the new “kegerator” installed in his new tiki bar, a knock came at the door. It was the Secret Service saying the president was about a half-hour away.

“It was unexpected, but very appreciated,” Remsburg would later say about the visit. “I mean, think about it. How many people can say the president of the United States stopped by and said Hi?”

Fewer can say they met the president six times. Each meeting has had its own time and tone, as would Meeting 6.

Meeting 1 was solemn and incidental: Normandy, France, 2009, the 65th anniversary of the D-Day landing. Obama was there to pay homage. Remsburg was a member of an honor guard. The two spoke briefly, and a White House photographer gave Remsburg a keepsake photo.

Meeting 2 came by chance: a hospital ward, Bethesda, Md., 2010. Remsburg, who had returned to combat duty in Afghanistan after D-Day, had been hit by an improvised explosive device. The blast threw him in the air, and when he landed, he lost a chunk of his skull and was left in a coma. Awaking, he found he had lost much of his ability to walk and to speak. He was flown to a military hospital.

When the president came to visit, he noticed a photo hanging on the wall — a photo of him standing next to a young soldier at the D-Day memorial.

Obama realized that soldier in the photo was the barely recognizable patient in front of him. It kindled a relationship between the commander in chief and the soldier struggling past his war wounds and learning to walk, talk and eat again.

Meeting 3 was private: Desert Vista High School, Ahwatukee Foothills, 2013. Obama had come to Phoenix to give a speech. Aides arranged for the two to meet privately; Obama saw Remsburg’s progress with physical therapy.

Meeting 4 couldn’t have been more public: in the balcony of the House of Representatives, seated next to first lady Michelle Obama, January 2014. The Obamas had invited Remsburg to the State of the Union address, and in it, Obama told Remsburg’s story to the nation and the world. “Like the Army he loves, like the America he serves, Sergeant 1st Class Cory Remsburg never gives up and he does not quit,” Obama said, and the chamber rose to give a standing ovation.

Meeting 5 was reminiscent: France, June 2014. Both men attended ceremonies to mark the 70th anniversary of D-Day.

Which all led up to Meeting 6.

Craig Remsburg, Cory’s father, said he had received calls months ago from White House staff wanting to be involved in the unveiling of Remsburg’s new home.

The house was bought by the Lead the Way Fund, a charity that aids wounded Army Rangers. It was remodeled by Homes for Wounded Warriors, a charity started by NFL player Jared Allen. Construction began in August.

All of these plans were kept as a surprise for Cory Remsburg, who had no inkling that he would meet the president a sixth time.

Neither did guests. Tom Bulinski, who worked on the landscaping for the home, and Alison Christian were leaving the barbecue at about 1:30 p.m. They turned back, Bulinski said, when they saw police officers crowded in the parking lot of a nearby church. They figured Obama was on the way.

Craig Remsburg answered a knock on the door just before 2 p.m. It was the Secret Service. They told guests they could either leave or submit to a security screening and stay. Just before the president arrived, agents could be heard directing guests where to stand in the backyard.

Obama entered the backyard and addressed the crowd on a microphone.

“I thought I’d just stop by; I was in the neighborhood,” Obama said as guests stood by the backyard pool. “I didn’t bring my swim shorts, though.”

Obama said he is proud of Remsburg. “There are a whole bunch of Corys out there,” he said, “and not all their wounds are as easily seen. We’ve got to be just as vigilant, just as generous and just as focused in making sure that every single one of our men and women in uniform, that they’re getting what they’ve earned and what they deserve.”

Obama left behind gift baskets he said were from him and the first lady. Among the goodies were jars of honey made at the White House and bottles of White House honey blond beer and honey ale.

Remsburg said he and Obama chatted briefly — a ” ‘keep up the good work’ kind of conversation.”

Remsburg, who goes through hours of physical and occupational therapy each week, is still an enlisted soldier and respects the unique opportunity he has had to meet with his commander in chief.