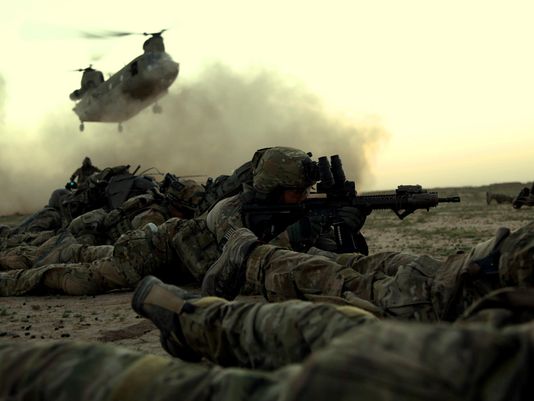 A host of nonprofit groups provided nearly $1.1 million and offers of additional help when the government shutdown cut aid to troops and their relatives, most notably 29 families whose uniformed loved ones died during the closure — some in combat.

The largest commitment was $700,000 divided among 28 of the families by the Fisher House Foundation, a group that builds residences on military hospital grounds for use by the relatives of casualties. The foundation is waiting for contact information on the last family, says spokesperson Jody Fisher.

In addition, a small Long Island-based nonprofit that assists Army Rangers has paid out nearly $100,000, according to Robert Hotarek, president of Lead the Way Fund.

The Navy-Marine Corps Relief Society provided more than $194,000 in financial assistance to 137 current or retired sailors, Marines and their families impacted by the shutdown, says Shelley Marshall, communications officer for the group. The money went for such expenses as travel costs for families visiting wounded or injured service members or traveling to Dover, Del. to meet remains of deceased troops, she said.

Army Emergency Relief provided $87,000 to 42 soldiers and their families during the shutdown for issues ranging from rental assistance to travel costs to moving expenses, says spokesman Guy Shields.

Lead the Way Fund stepped in after two Army Rangers, along with two other soldiers were killed during a night mission Oct. 6 against a compound in southern Afghanistan.

A suicide bomber detonated an explosive vest and other hidden bombs exploded as Rangers closed in during that assault on a compound, says Lt. Col. Brian DeSantis, a spokesman for the 75th Ranger Regiment.

“Those (nonprofit) organizations — we, really, as the Ranger Regiment and, really, as a country owe them a debt of gratitude, because they were able to support four families that had just experienced a loss,” DeSantis says. “(They) banded together to make sure that four Gold Star families got everything they needed through that very difficult time.”

The Fisher House assistance was in the form of $25,000 “gifts” to those four families and the families of 25 other troops who died during the government shutdown from Oct. 1-16. Lead the Way Fund offered assistance for burial and/or travel costs for families of the four soldiers who died in Oct. 6 attack.

The shutdown prevented the Pentagon from providing an immediate $100,000 “death gratuity” to families of service members who died or were killed. Military funds for transporting families to meet the returned remains of their loved ones or to visit them at military hospitals were also canceled.

Congress eventually reinstated the death gratuity and other support payments before the shutdown ended.

The Pentagon this week identified eight other nonprofit groups that offered or provided assistance during the government shutdown. Officials in several of the groups said donors were clamoring to donate after hearing news of the suspended death gratuities.

JPMorgan Chase also offered assistance during the shutdown. The financial institution previously founded a jobs hiring program that with a coalition of companies has hired 92,869 veterans since 2011, says spokesperson Shannon O’Reilly.