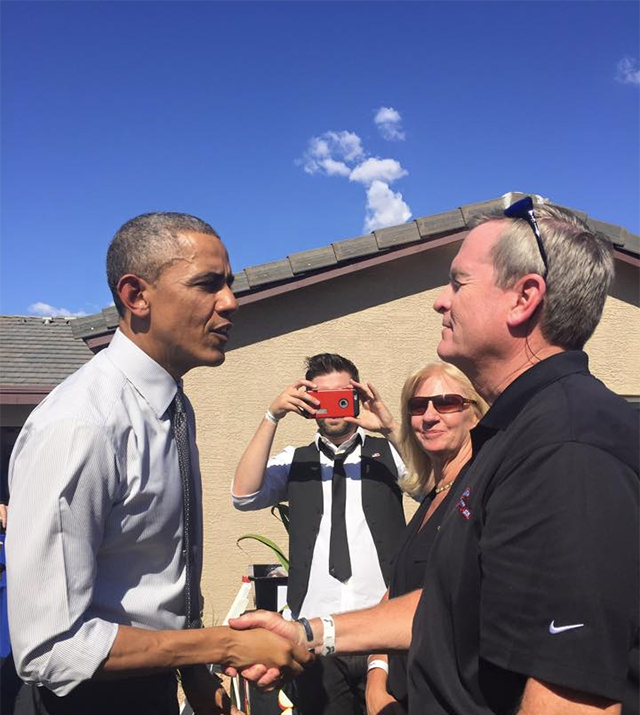 GILBERT, Ariz. — If one relationship embodies the burden President Obama has carried as a wartime commander in chief, it may be the one with Sgt. First Class Cory Remsburg, an Army Ranger who was severely wounded in Afghanistan.

As detailed in a New York Times article in 2013, Mr. Obama first met Sergeant Remsburg on Omaha Beach in France in 2009, when the two were taking part in a D-Day commemoration. Less than a year later, they met again by chance at a military hospital outside of Washington, where the soldier was recovering from combat wounds — paralyzed and brain-damaged.

On Friday, Mr. Obama again visited Sergeant Remsburg — who was walking and talking, though still struggling with his injuries — at his new home in Gilbert, a suburb of Phoenix, built and specially renovated by veterans’ organizations.

President Obama greeted Sgt. First Class Cory Remsburg, who was severely wounded by an explosive device in Afghanistan. Progress Is Slow at V.A. Hospitals in Wake of Crisis
video Obama Visits Phoenix V.A. Hospital. The president joined a backyard picnic with Sergeant Remsburg’s family and friends to celebrate his move into the new house. Among Mr. Obama’s housewarming gifts: some of the beer brewed in the White House.

“The greatest honor of my life is serving as commander in chief of the greatest military the world’s ever known,” Mr. Obama said, adding that Sergeant Remsburg’s “never give up, never give in” attitude was “the kind of thing that keeps me going.”

Mr. Obama was in Phoenix to visit the Veterans Affairs hospital there, which is at the center of a scandal involving the provision of care. But if the morning’s events were difficult for the president, the surprise afternoon stop at Sergeant Remsburg’s put a broad smile on his face.

Over the years, Mr. Obama has cited Sergeant Remsburg as the personification of the difficult choices he has had to make as commander in chief, especially as the country fought two wars and expanded its battle with terrorists.

White House officials said Sergeant Remsburg received the keys to his new house earlier on Friday. The house was purchased by the Army Ranger Lead the Way Fund, and it was renovated for Sergeant Remsburg’s use with the help of Homes for Wounded Warriors, a group founded by the Chicago Bears football player Jared Allen.

After taking a brief tour, Mr. Obama called the house “an incredible place” and said he predicted that Sergeant Remsburg was “going to be able to work out, I suspect watch quite a few sports programs and have the occasional libation.”

Mr. Obama praised the members of the community who helped make the house possible, saying that “it speaks to who we are a country and who we are as a people.

“We know that there are a whole bunch of Corys out there and not all of their wounds are as easily seen,” he added. “We’ve got to be just as vigilant, just as generous and just as focused in making sure that every single one of our men and women in uniform, that they’re getting what they’ve earned and what they deserve.”