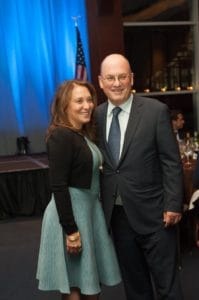 Steven A. Cohen is the Chairman and Chief Executive Officer of Point72, a 1,250+ person registered investment advisor. Mr. Cohen founded S.A.C. Capital Advisors in 1992 and converted his investment operations to the Point72 Asset Management family office in 2014. Point72 began managing outside capital in 2018.

An avid philanthropist and entrepreneur, Mr. Cohen has founded and holds active leadership roles in a number of nonprofit organizations.

Mr. Cohen and his wife, Alexandra, founded the Steven & Alexandra Cohen Foundation in 2001. The Cohen Foundation is committed to achieving lasting and meaningful change through commitments to children’s health, education, veterans, and the arts. Mr. Cohen created Cohen Veterans Network and Cohen Veterans Bioscience in 2015 to improve the mental healthcare, treatment, and quality of life for recently-returned veterans and their families.

Mr. Cohen received a B.S. in Economics from The Wharton School at the University of Pennsylvania. He began his investing career at Gruntal & Co., where he managed proprietary capital for 14 years before starting his own investment business.