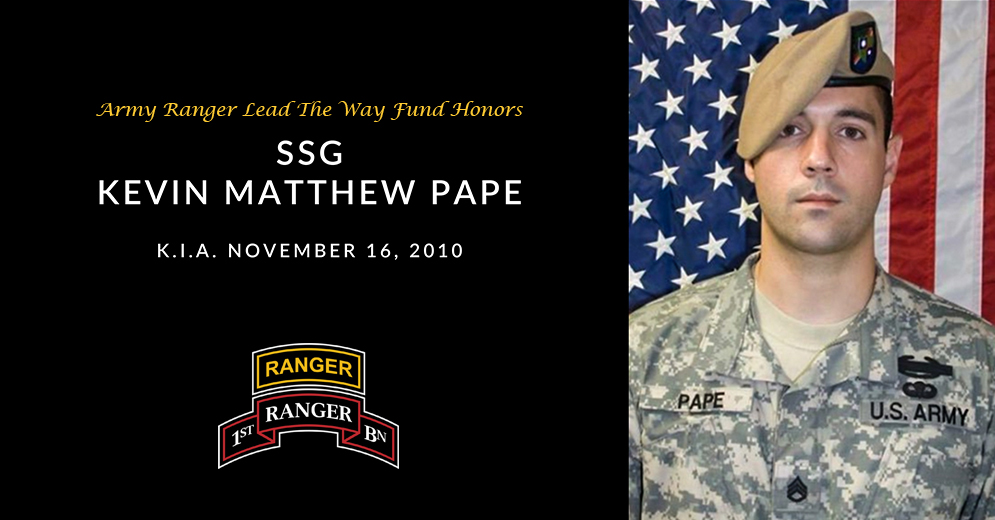 Kevin Matthew Pape was born February 5, 1980 in Fort Wayne, Indiana. He enlisted in the U.S. Army in September 2005 from his hometown of Fort Wayne, Indiana. After graduating Ranger Assessment and Selection Program, Pape was assigned to Co. C, 1st Battalion,75th Ranger Regiment in April 2006, where he served as a machine gunner, team leader and squad leader. SSG Pape was on his 6th deployment, 3rd Afghanistan tour, when he was killed on November 16, 2010 after he was wounded during a shootout with insurgents in Kunar province, Afghanistan.

As a Ranger, Pape selflessly lived his life for others and distinguished himself as a member of the Army’s premier light-infantry unit, continuously deployed in support of Operations Iraqi Freedom and Enduring Freedom, and fought valiantly as he served his fellow Rangers and our great Nation.

SSG Pape is survived by his wife Amelia Rose Pape, his daughter Anneka Sue who currently live in Indiana.

The organization continues to be in close contact with Amelia and Anneka and has provided financial support for needs such as a new washing machine and summer camp, to name a few.