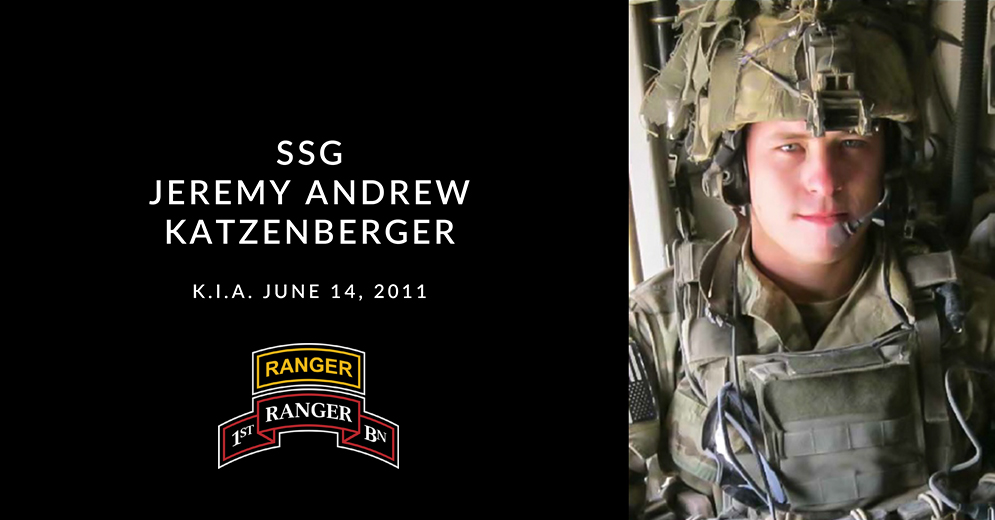 Staff Sgt. Katzenberger was a squad leader assigned to Company B, 1st Battalion, 75th Ranger Regiment at Hunter Army Airfield, Ga. He was on his eighth deployment in support of the War on Terror with four previous deployments to Iraq and three to Afghanistan.

He was born Nov. 2, 1984 in Kansas City, Mo. He enlisted in the U.S. Army in October 2004 from his hometown of Weatherby Lake, Mo. Staff Sgt. Katzenberger completed One Station Unit Training at Fort Benning, Ga., as an infantryman. After graduating from the Basic Airborne Course there, he was assigned to the Ranger Assessment and Selection Program also at Fort Benning.

Staff Sgt. Katzenberger graduated from the Ranger Assessment and Selection Program and was then assigned to Company B, 1st Battalion, 75th Ranger Regiment in April 2005, where he served as a rifleman, automatic rifleman, team leader and Ranger squad leader.

Staff Sgt. Katzenberger is survived by his wife Colleen A. (Montgomery) and his son Everett James, both of Richmond Hill, Ga., and his parents Robert and Peggy Katzenberger of Weatherby Lake, Mo.

As a Ranger, Staff Sgt. Jeremy Andrew Katzenberger selflessly lived his life for others and distinguished himself as a member of the Army’s premier direct action raid force, continuously deployed in support of the War on Terror, and fought valiantly as he served his fellow Rangers and our great Nation.