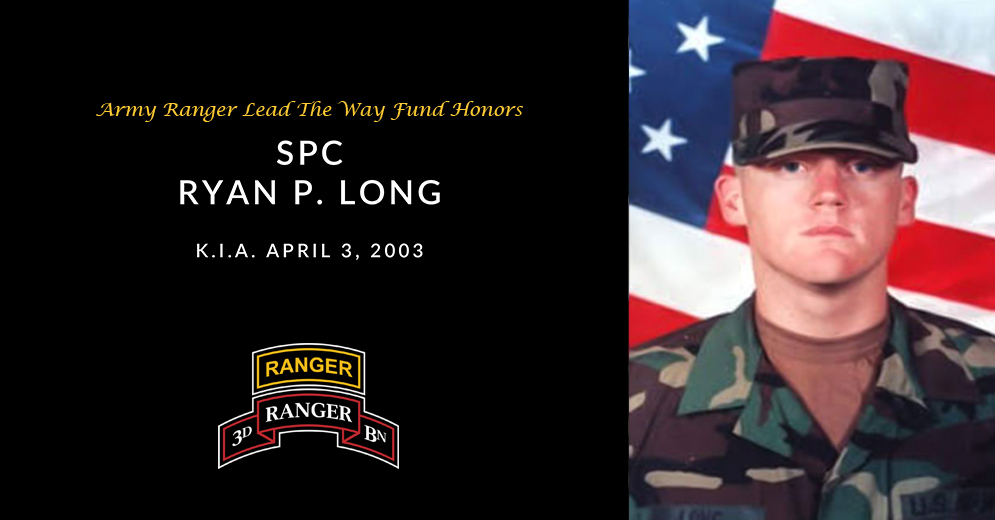 Specialist Ryan P. Long was born April 19, 1981 in the District of Columbia. He volunteered for and entered the Army in September 1999.

He completed basic training and advanced individual training in the military operational specialty of Infantryman at Fort Benning, Georgia. Specialist Long continued his military training at Fort Benning when he attended Airborne School and graduated in 2000. Following graduation from the Ranger Indoctrination Program, he was assigned to the 3d Battalion, 75th Ranger Regiment in April 2000.

Specialist Long was a Rifleman with Company A, 3rd Battalion. He died in combat after a civilian vehicle exploded at a Coalition checkpoint 18 km southwest of Hadithah Dam in Iraq.

His awards and decorations include the Army Service Ribbon, the Parachutist Badge and the Ranger Tab. He was posthumously awarded the Bronze Star Medal for Valor, the Combat Infantryman’s Badge and the Purple Heart. From October 2001 until January 2002, Specialist Long deployed to Afghanistan in support of Operation Enduring Freedom.

His parents, Rudy and Donna Long of Seaford, Del, survive him.

As a Ranger, Specialist Long distinguished himself as a member of the Army’s premier light-infantry unit, traveled to all corners of the world in support of the Global War on Terrorism, and fought valiantly to uphold the prestige, honor, and high “esprit de corps” of my Ranger Regiment.