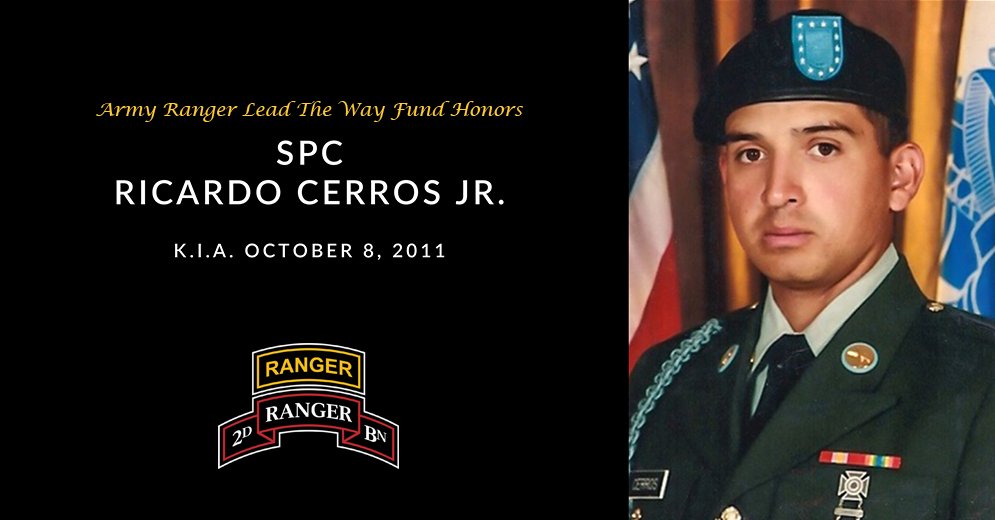 Spc. Ricardo Cerros Jr., 24, was killed by enemy forces during a heavy firefight while conducting combat operations in Logar Province, Afghanistan. He was mortally wounded as he fought against enemy insurgents barricaded in a compound.

Cerros was a Ranger rifleman assigned to Company B, 2nd Battalion, 75th Ranger Regiment at Joint Base Lewis-McChord, Wash. He was on his first deployment to Afghanistan in support of the War on Terror.

Cerros was born Nov. 2, 1986 in Fort Ord, Calif. After graduating from Everett Alarez High School and the University of California, Irvine, he enlisted in the U.S. Army in July 2010 in Los Angeles, Calif.

Cerros completed One Station Unit Training at Fort Benning, Ga., as an infantryman. After graduating from the Basic Airborne Course, he was assigned to the Ranger Assessment and Selection Program at Fort Benning.

Following graduation from Ranger Assessment and Selection Program, Cerros was assigned to Company B, 2nd Bn., 75th Ranger Regiment in March 2011, where he served as a Ranger rifleman.

His awards and decorations include the Parachutist Badge and the U.S. Army Expert Rifle Marksmanship Qualification Badge.

He was posthumously awarded the Purple Heart, Combat Infantryman’s Badge, and the Afghanistan Campaign Medal. Additional posthumous awards are pending.

As a Ranger, Cerros selflessly lived his life for others and distinguished himself as a member of the Army’s premier direct action raid force. Cerros fought valiantly as he served his fellow Rangers and our great Nation.