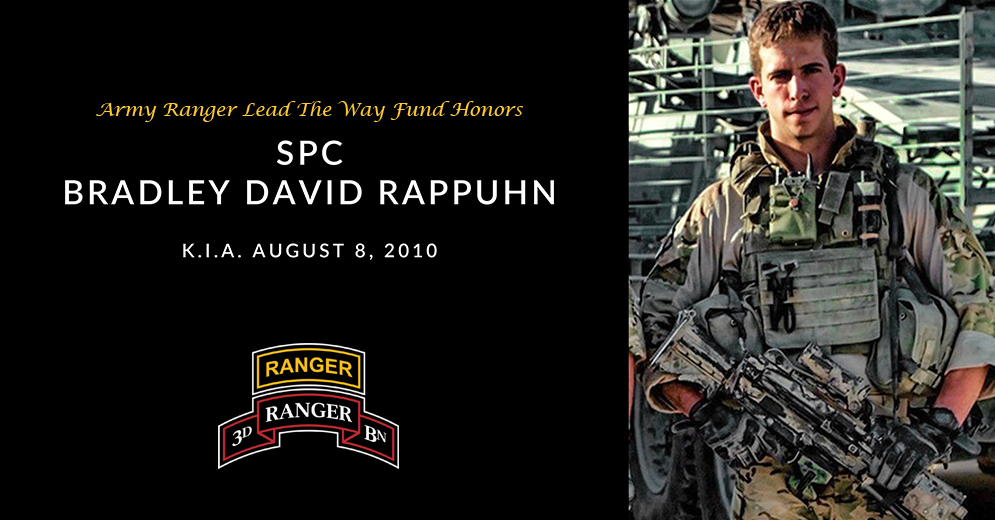 Spc. Bradley David Rappuhn was an anti-armor specialist assigned to Company B, 3rd Battalion, 75th Ranger Regiment at Fort Benning, Ga. He was born on April 24, 1986, in Lansing, Mich.

He was seriously wounded by an enemy improvised explosive device during a combat operation in Kandahar Province, Afghanistan. Rappuhn was treated immediately by unit medical personnel and quickly evacuated to the nearest treatment facility where he died of his wounds.

Rappuhn was on his first deployment in support of the Global War on Terror.

Following graduation from the Ranger Assessment and Selection Program in August 2009, Rappuhn was assigned to Company B, 3rd Battalion, 75th Ranger Regiment, where he served as an anti-armor specialist.

Rapphun is survived by his father, Cary Rappuhn, of Potterville, Mich., and his mother, Roxanne Rappuhn and his brother, Brent Rappuhn, both of Grand Ledge.

As a Ranger, Rappuhn selflessly lived his life for others while he distinguished himself as a member of the Army’s premier light-infantry unit, which remains continuously deployed in support of the War on Terrorism. In every instance he fought valiantly as he served his fellow Rangers and our great Nation.