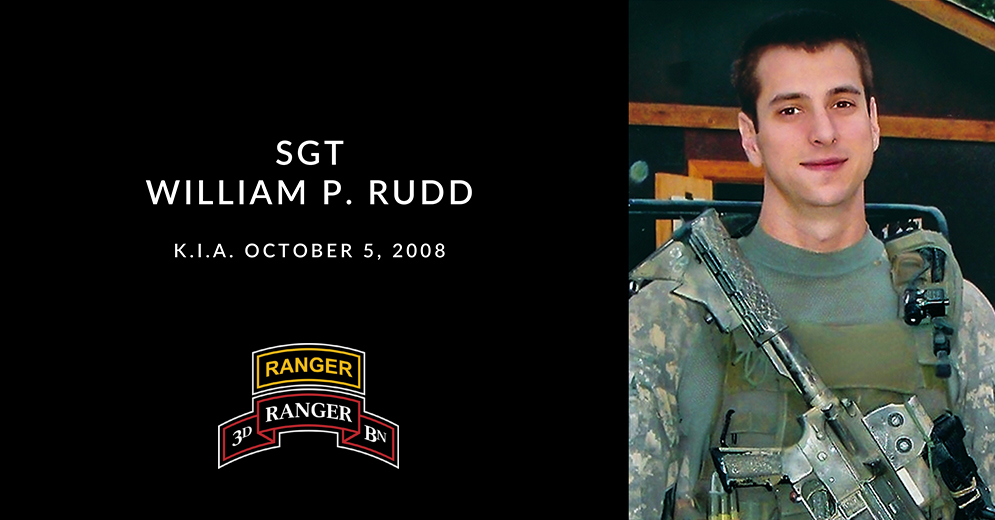 Sgt. William P. Rudd was killed in action on Oct. 5, 2008, when he was hit by enemy fire during combat operations in northern Iraq while serving with Company B, 3 rd Battalion, 75 th Ranger Regiment based at Fort Benning, Ga. He was born Nov. 5, 1980, in Madisonville, Kentucky.

He was wounded in a ground assault raid targeting associates of senior Al Qaeda leader when enemy fighters, some armed with suicide vests, engaged the U.S. forces with small arms fire.

This was Rudd’s eighth deployment in support of the War on Terrorism with two previous deployments to Afghanistan and five to Iraq.

He volunteered and enlisted in the Army on Oct. 2, 2003. After completion of the one station unit training, he volunteered for service as an Army Ranger and completed the Ranger Indoctrination Program at Fort Benning. Rudd was assigned to Company B on Aug. 9, 2004, where he served as a rifleman, grenadier, and fire team leader.

Rudd completed numerous military courses while serving in the Army, including the Basic Airborne Course, the Ranger Indoctrination Program, the Warrior Leaders Course, the Jumpmaster Course, the Master Breacher Course, and the U.S. Army Ranger Course.

Rudd is survived by his father, William E. and stepmother, Barbara Rudd, and step brother, Josh of Madisonville, Ky.; his mother, Pamela Lam and sister, Elizabeth of Nortonville, Ky.

As a Ranger, Rudd distinguished himself as a member of the Army’s premier light infantry unit, traveled to all corners of the world in support of the Global War on Terrorism and fought valiantly to “uphold the prestige, honor and high ‘esprit de corps’” of the Ranger Regiment.