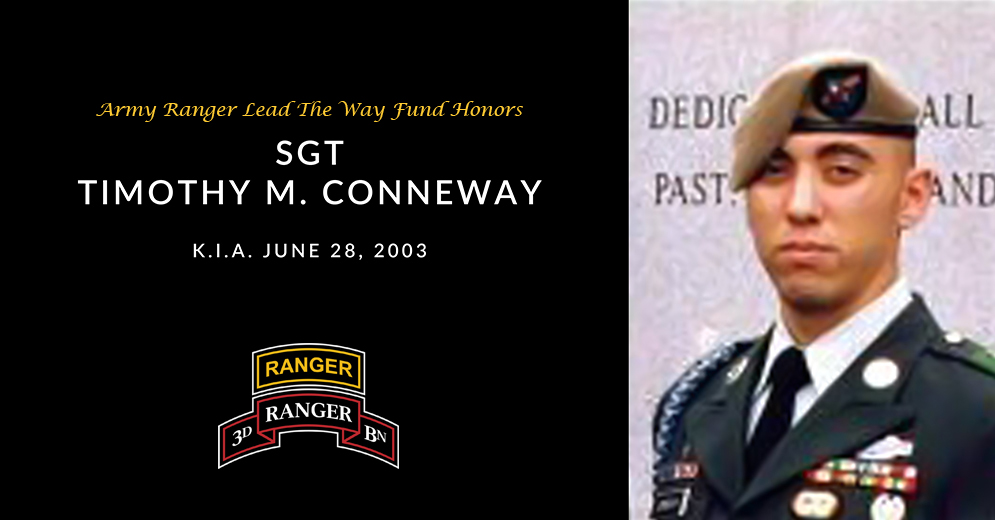 He completed basic training and advanced individual training in the military operational specialty of infantryman at Fort Benning, Ga. Conneway continued his military training at Fort Benning when he attended the Basic Airborne Course and then the Ranger Indoctrination Program. On Jan. 27, 2000, he was assigned to the 3rd Battalion, 75th Ranger Regiment. Conneway served as a rifleman, grenadier, machine gunner and team leader with the battalion’s Company B.

He was posthumously awarded the Bronze Star Medal with Valor device, the Purple Heart and the Meritorious Service Medal.

In support of the nation’s Global War on Terrorism, Conneway deployed with his Ranger battalion and participated in combat operations in both Iraq and Afghanistan.

His wife, Catherine Fay Conneway, of Columbus, Ga., survives him. He is also survived by his parents, James Kenneth and Sally Ann Conneway of Enterprise, Ala., and one brother.

As a Ranger, Sgt. Timothy Conneway distinguished himself as a member of the Army’s premier light-infantry unit, traveled to all corners of the world in support of the Global War on Terrorism, and fought valiantly to “uphold the prestige, honor, and high ‘esprit de corps’” of the Ranger Regiment.