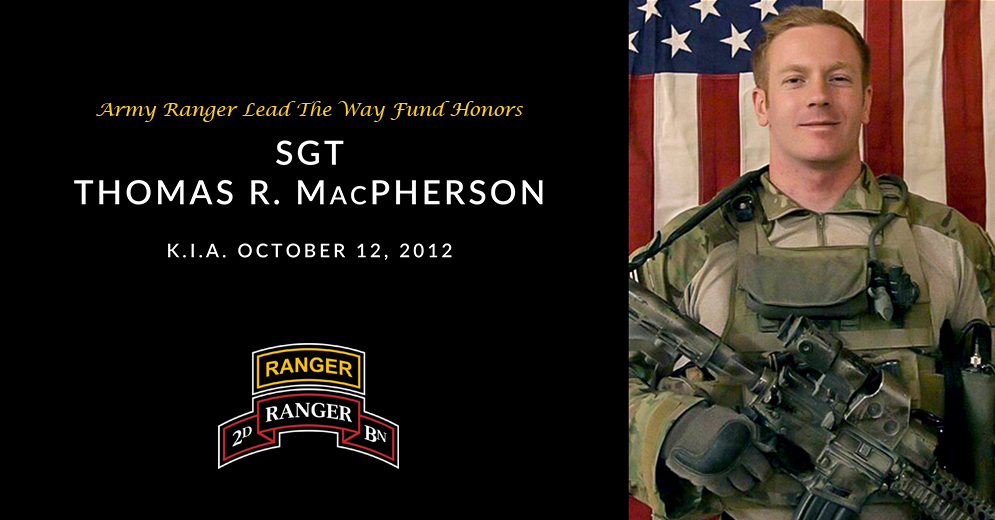 Sgt. Thomas R. MacPherson, 26, was killed by enemy forces during a heavy firefight while conducting combat operations in Ghazni Province, Afghanistan. He was leading an assault against an enemy position when he was mortally wounded by small arms fire. MacPherson was a team leader assigned to Company D, 2nd Battalion, 75th Ranger Regiment at Joint Base Lewis-McChord, Wash. He previously served one deployment to Iraq and this was his fourth deployment to Afghanistan.

MacPherson was born July 20, 1986 in Long Beach, Calif. and graduated from Los Alamitos High School. He enlisted in the U.S. Army in May 2007 and completed One Station Unit Training at Fort Benning, Ga., as an infantryman. After graduating from the Basic Airborne Course there, he was assigned to the Ranger Assessment and Selection Program also at Fort Benning.

MacPherson is survived by his wife, Claudia, and their son Brayden, now 8, and his parents Troy and Diona MacPherson.

Army Ranger Lead The Way Fund provided financial assistance to help Claudia send Brayden to a special school that would accommodate his needs and continue to stand ready to support Claudia and Brayden as needed.