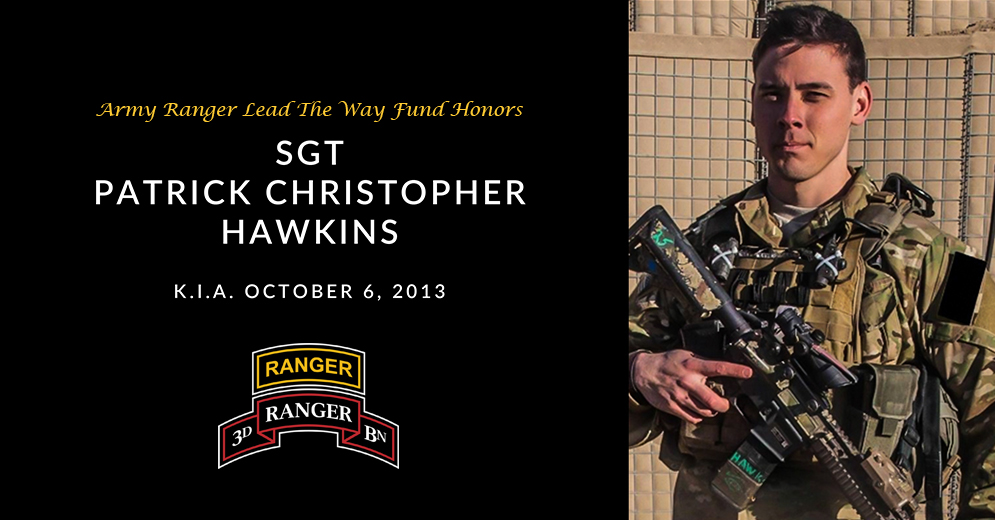 Army Ranger SGT Patrick Christopher Hawkins, 25, was killed October 6, 2013 by an improvised explosive device while conducting combat operations against enemy forces in Kandahar Province, Afghanistan. SGT Hawkins was a Team Leader assigned to Company B, 3rd Battalion, 75th Ranger Regiment at Fort Benning, Ga. He was on his fourth deployment to Afghanistan in support of the War on Terror.

As a Ranger, SGT Hawkins selflessly lived his life for others and distinguished himself as a member of the Army’s premier direct action raid force, continuously deployed in support of the Global War on Terror, and fought valiantly as he served his fellow Rangers and our great Nation.

Patrick is survived by his wife, Brittanie M. Hawkins, and his parents, Roy, and Shelia Hawkins.

Army Ranger Lead The Way Fund honored his family at our annual Gold Star Memorial Event by presenting a hand painted portrait of Patrick commissioned by the American Fallen Soldier’s Project.  We continue to engage with Brittanie to ensure that all of her needs are being met and stand ready to support her as needed.