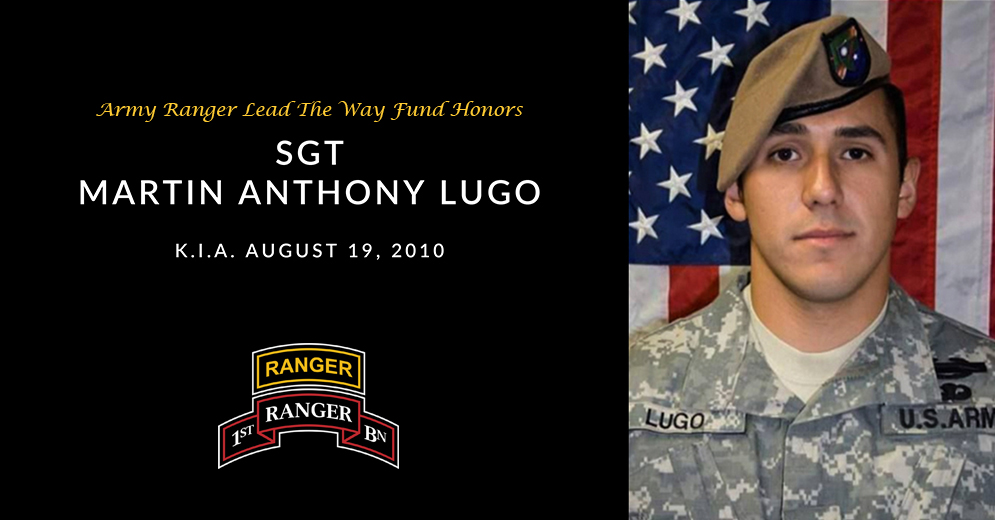 Sgt. Martin Anthony Lugo, 24, was a squad leader assigned to Company C, 1st Battalion, 75th Ranger Regiment at Hunter Army Airfield, Ga. He was born on April 22, 1986, and was a native of Tucson, Ariz.

Sgt. Lugo was seriously wounded in a fire fight with the enemy during a combat operation in Logar Province, Afghanistan. He was treated immediately by unit medical personnel and quickly evacuated to the nearest treatment facility where he died of his wounds.

He was on his sixth deployment in support of the War on Terror. He had previously deployed three times to Afghanistan and twice to Iraq.

After graduating from high school in Tucson, Lugo enlisted in the U.S. Army in September 2004. He completed One Station Unit Training at Fort Benning, Ga., as an infantryman. Then after graduating from the Basic Airborne Course, he was assigned to the Ranger Assessment and Selection Program at Fort Benning, Ga. Following graduation from the Ranger Assessment and Selection Program, Lugo was assigned to Company C, 1st Battalion, 75th Ranger Regiment in April 2005, where he served as an ammunition handler, automatic rifleman, team leader and squad leader.

He is survived by his father, Martin Lugo; his mother Maria Marin and step-father Esteban Oropeza; and, his sister Leslie Bencic and his brother-in-law Christopher Bencic, all of Tucson, Ariz.

As a Ranger, Lugo selflessly lived his life for others and distinguished himself as a member of the Army’s premier light-infantry unit, continuously deployed in support of the War on Terror, and fought valiantly as he served his fellow Rangers and the Nation.