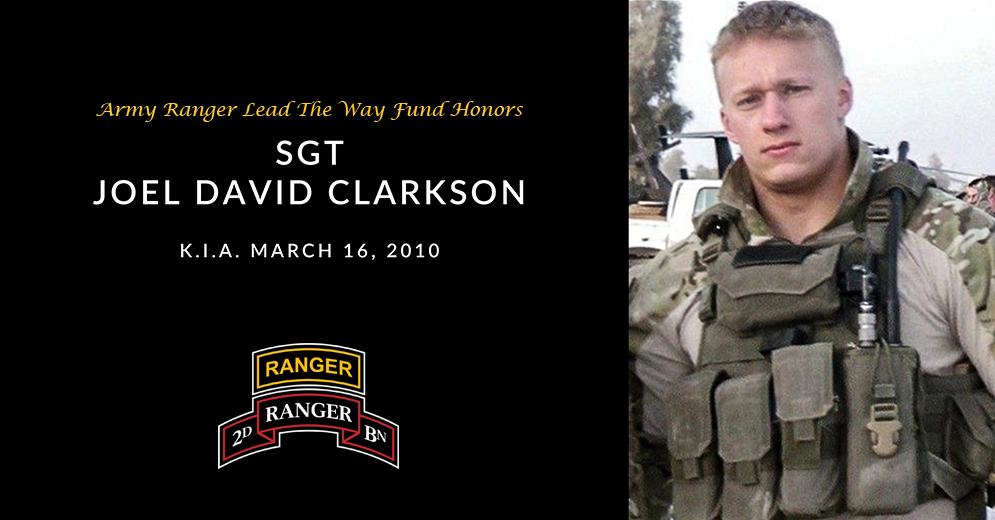 Sgt. Joel David Clarkson, 23, was a team leader assigned to 2nd Battalion, 75th Ranger Regiment at Joint Base Lewis-McChord, Wash. He was born on Oct. 8, 1986.

Clarkson was seriously wounded during a fierce direct-fire combat engagement against a heavily armed and determined enemy in Farah Province, Afghanistan, March 13. He was treated by unit medics, immediately evacuated to the nearest medical treatment facility, and subsequently transferred to Landstuhl Regional Hospital, Landstuhl, Germany where he died March 16. He was on his fifth deployment in support of the War on Terror with three previous deployments to Iraq and one to Afghanistan.

Clarkson enlisted in the U.S. Army from his hometown of Fairbanks, Alaska in February 2006. He completed One Station Unit Training at Fort Benning, Ga., as an infantryman. After graduating from the Basic Airborne Course there, he was assigned to the Ranger Indoctrination Program also at Fort Benning.

Clarkson was posthumously awarded the Purple Heart, the Bronze Star Medal, and the Army Commendation Medal.

Clarkson is survived by his son Orion, now 11, who was one at the time of his passing; his parents, Karen and Steven Clarkson of Fairbanks, Alaska, and his older sister, Jessica who resides in Hong Kong. Tragically, in early 2019, his wife Kassandra died at the age of 29. Orion now resides with his grandmother Karen, who is his legal guardian.

Army Ranger Lead The Way Fund has kept close contact with Orion and Grandma Karen. We provided them with financial assistance while she obtained custody and supported him as he attended a 3-month therapeutic camp during the summer of 2020. Now technically an orphan, Orion has a long road ahead of him due to the severity of his needs and his grief. We are committed to him for the long-term to ensure he has a happy and fruitful life.