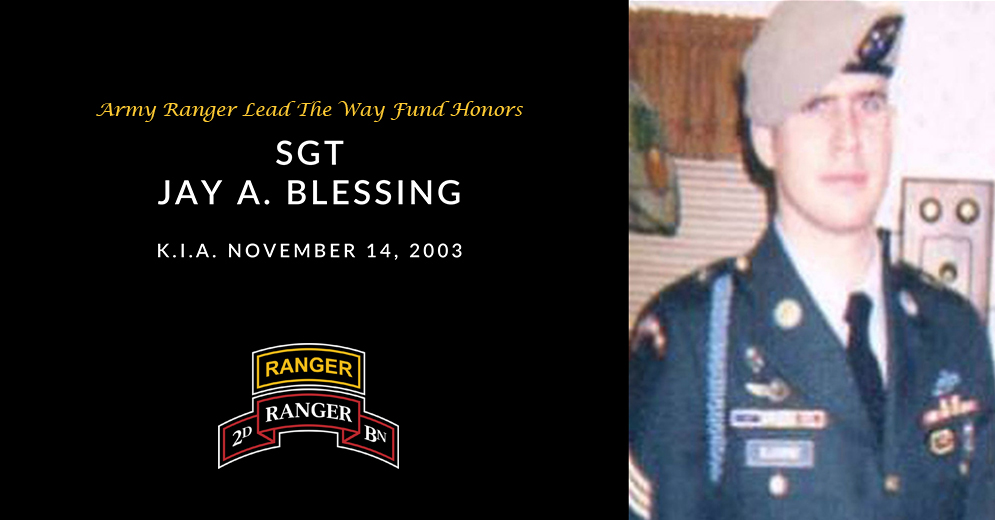 He was killed Nov. 14, 2003, in eastern Afghanistan after an improvised explosive device detonated as his unit was conducting a combat patrol there.

Blessing volunteered for Army service in August 1998. He completed One Station Unit Training in the military operational specialty of infantryman at Fort Benning, Ga. Blessing continued his military training at Fort Benning when he attended the Basic Airborne Course in November 1998 and then graduated from the Ranger Indoctrination Program in January 1999. On January 28, 1999, he was assigned to the 2nd Battalion, 75th Ranger Regiment at Fort Lewis, Wash. He went on to graduate from the U.S. Army Ranger Course and the Primary Leadership Development Course and was promoted to sergeant in June 2002.

Blessing is survived by his father, James A. Blessing, of Tacoma, Wash., and his brother, Jason Blessing, also of Tacoma. His mother, Carol Lee M. Blessing, is deceased.

As a Ranger, Sgt. Jay Blessing distinguished himself as a member of the Army’s premier light-infantry unit, traveled to all corners of the world in support of the Global War on Terrorism, and fought valiantly to “uphold the prestige, honor, and high esprit de corps” of the 75th Ranger Regiment.