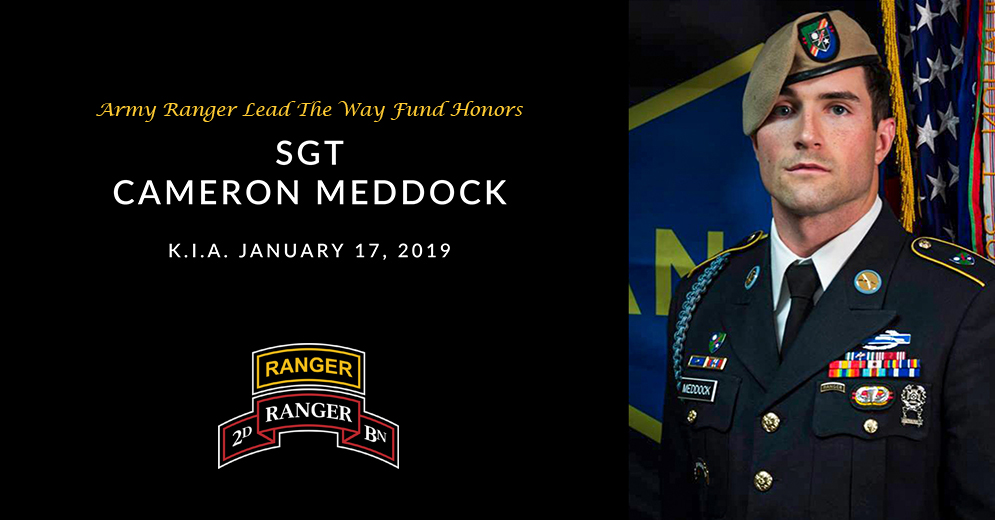 Sgt. Cameron A. Meddock, 26, of Spearman, Texas, died Jan. 17, 2019, in Landstuhl, Germany, as a result of wounds sustained from small arms fire on Jan. 12, 2019, in Badghis Province, Afghanistan while serving with Company A, 2nd Battalion, 75th Ranger Regiment based at Joint Base Lewis-McChord, Washington.

Meddock enlisted in the U.S. Army November 14, 2014. He completed One Station Unit Training as an Infantryman, the Basic Airborne Course and the Ranger Assessment and Selection Program 1 at Fort Benning, Georgia.

Following successful completion of Ranger Assessment and Selection Program Level 1, Meddock was assigned to Company A, 2nd Battalion, 75th Ranger Regiment where he served as a machine gunner, automatic rifleman, gun team leader and most recently as a fire team leader.

Sadly, when Cameron was mortally wounded, his wife Stevie was 20 weeks pregnant with their first child. It took an almost herculean effort to fly his family, including mother, step father, father and brother to Germany in time to say their goodbyes. With no passports and all coming from remote areas, Army Ranger Lead The Way Fund worked day and night to make sure they made it in time. They did. Stevie has since given birth to their beautiful daughter Brinley and Army Ranger Lead The Way Fund continues to communicate with her regularly to make sure all of their needs are being met.