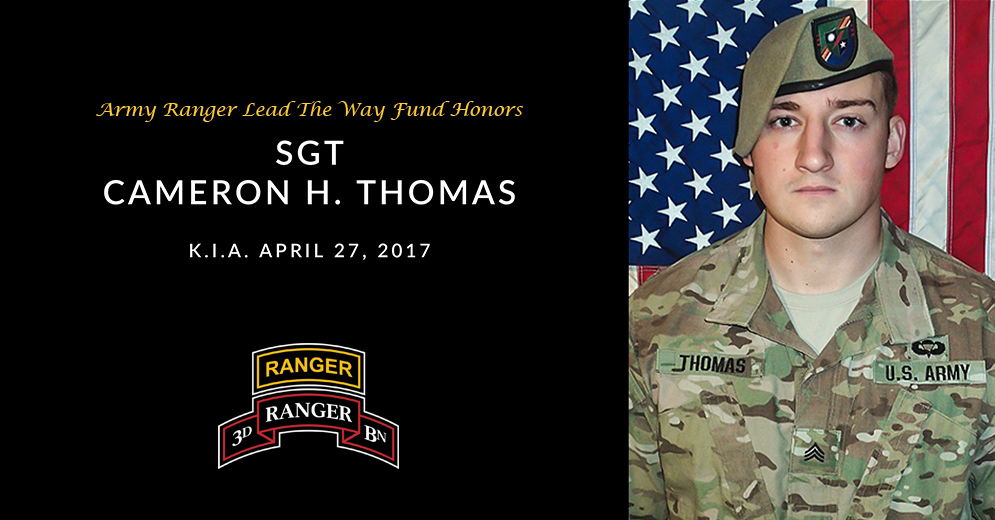 Sgt. Cameron H. Thomas, 23, was killed on April 27, 2017 while conducting combat operations in Nangarhar Province, Afghanistan. Sgt. Thomas was a Sniper assigned to Delta Company, 3rd Battalion, 75th Ranger Regiment at Fort Benning, Ga. He was on his third deployment to Afghanistan.

He was born August 25, 1993 in Colorado Springs, Colorado. After graduating from high school, he enlisted in the U.S. Army from his hometown of Kettering, Ohio in February 2012. He completed One Station Unit Training at Fort Benning, Ga., as an Infantryman. After graduating from the Basic Airborne Course, he was assigned to the Ranger Assessment and Selection Program 1, also at Fort Benning.

Following graduation from the Ranger Assessment and Selection Program 1, Sgt. Thomas was assigned to Company C, 3rd Bn., 75th Ranger Regiment in November 2012 where he served as an Automatic Rifleman, Grenadier, and an Anti-Armor Specialist.

His awards and decorations include the Ranger Tab, the Expert Infantryman’s Badge, and the Parachutist Badge.

Cameron had a thirst for living his life to the fullest. He had a laugh that warmed the room, and a smile that was infectious. Growing Up, Cam participated in soccer, and had a passion for skateboarding. He was an academic, often in the gifted programs at school, he could solve any problem you threw at him, and even spoke Farsi. He had a passion for the military and did everything he could to prepare himself before he joined, from signing up for the swim team, rigorous daily workouts, going skydiving, and even and graduated high school early to join faster. Cameron was loved deeply by all who knew him.

He is Survived by his Parents, Heather, and Andre, and by his 11 siblings, James, Anna-Leigh, Whitney, Alisha, Devin, Arran, Ena, Chris, Shawn, Alanna, and Alexus, as well as numerous extended family members.