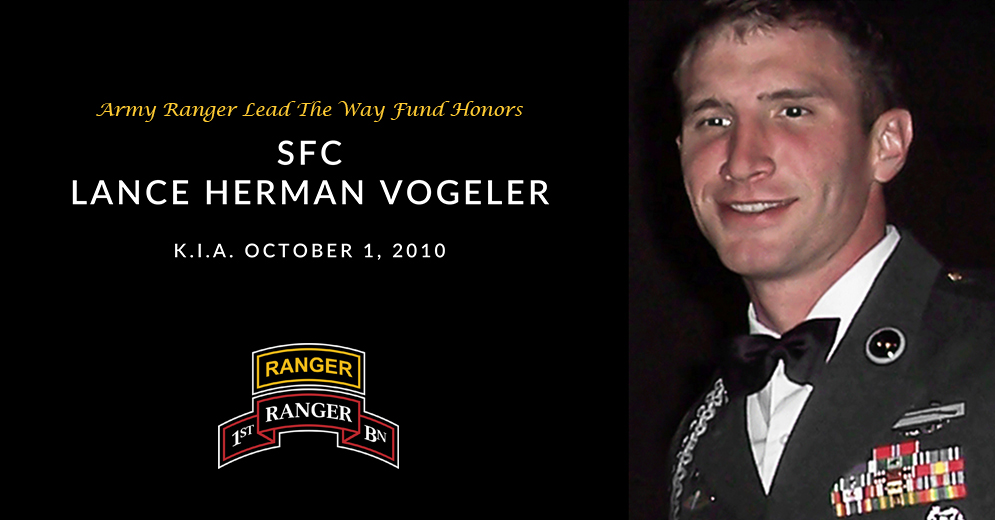 Sgt. 1st Class Lance Herman Vogeler, 29, was killed by enemy indirect fire during a heavy firefight while conducting combat operations in Helmand Province, Afghanistan. Vogeler was a mortars section leader assigned to 1st Battalion, 75th Ranger Regiment, at Hunter Army Airfield, Ga. He was on his 12th deployment in support of the War on Terror with four previous deployments to Iraq and seven to Afghanistan.

He was born on Aug. 9, 1981 in Manchester, Md and enlisted in the U.S. Army in May 2001 from his hometown of Frederick, Md. He completed One Station Unit Training at Fort Benning, Ga., as an indirect fire infantryman. After graduating from the Basic Airborne Course there, he was assigned to the Ranger Assessment and Selection Program also at Fort Benning.

Vogeler is survived by his wife, Melissa, son Colin and daughter, Madison and parents, Timothy and Donna Vogeler. Army Ranger Lead The Way Fund has given a significant amount in financial aid to assist Melissa with support for son Colin, who has special needs, many of which are not covered by the VA.

We also presented the family with a hand-painted portrait of Lance, commissioned by the American Fallen Soldiers Project, at our annual Gold Star Memorial event.