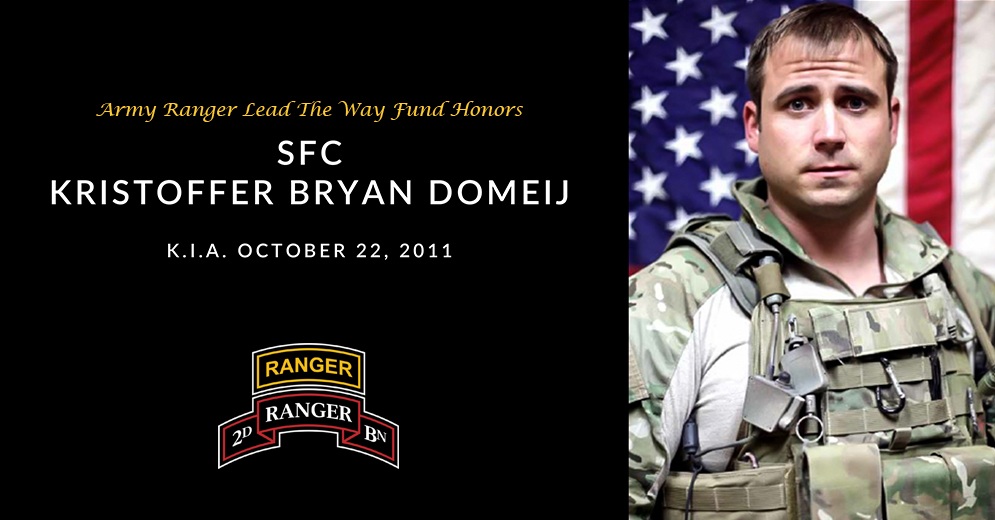 SFC Kristoffer B. Domeij, 29, was killed during combat operations in Kandahar Province, Afghanistan when the assault force triggered an improvised explosive device. Domeij was a Ranger Joint Terminal Attack Controller assigned to Headquarters and Headquarters Co., 2nd Bn., 75th Ranger Regiment at Joint Base Lewis-McChord, Wash. He was on his 14th combat deployment to Afghanistan in support of the War on Terror.

As a Ranger, Domeij selflessly lived his life for others and distinguished himself as a member of the Army’s premier direct-action raid force and fought valiantly as he served his fellow Rangers and our great Nation.

He is survived by his wife, Sarah, and daughters Mikajsa and Aaliyah of Lacey, Wash.; his mother Scoti Domeij of Colorado Springs, Colo., and his brother Kyle Domeij of San Diego, Calif.

In June 2019, during the 75th Anniversary of D-Day, Domeij’s mother Scoti did a tandem jump into Normandy with several of Kristoffer’s Ranger brothers as a tribute to him.