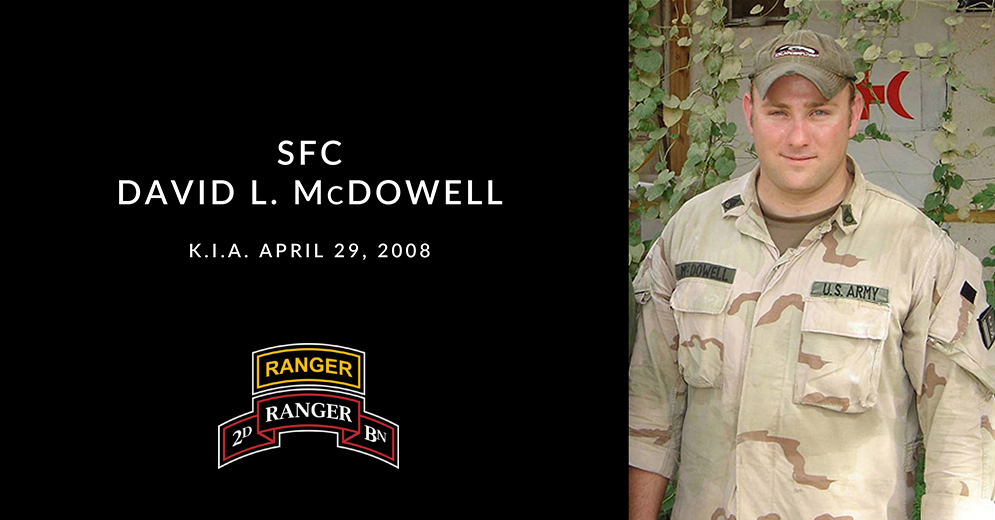 He was wounded by enemy fire while conducting combat operations and later died on April 29, 2008 near Bastion, Afghanistan. McDowell was serving in his seventh combat deployment. His previous deployments were to Afghanistan and Iraq.

He graduated from the Ranger Indoctrination Program in November 1996 and was then assigned to 2nd Bn., 75th Ranger Regiment in December 1996. He served there as an automatic rifleman, machine gun team leader, fire team leader, rifle squad leader, and weapons squad leader. In 2005, he was assigned to the Regimental Training Detachment as a pre Ranger Course instructor at Fort Benning. Following that assignment, McDowell returned to    2nd Bn., 75th Ranger Regiment as a platoon sergeant in 2006.

He is survived by his wife Joleen, son Joshua and daughter Erin of Lakewood, Wash., his mother Laurie Ann Wathen of Julian, Calif., and father Steven L. McDowell of Hope Mills, N.C.

As a Ranger, Sgt. 1 st Class David L. McDowell distinguished himself as a member of the Army’s premier light infantry unit, traveled to all corners of the world in support of the Global War on Terrorism, and fought valiantly to “uphold the prestige, honor, and high ‘esprit de corps’” of the Ranger Regiment.