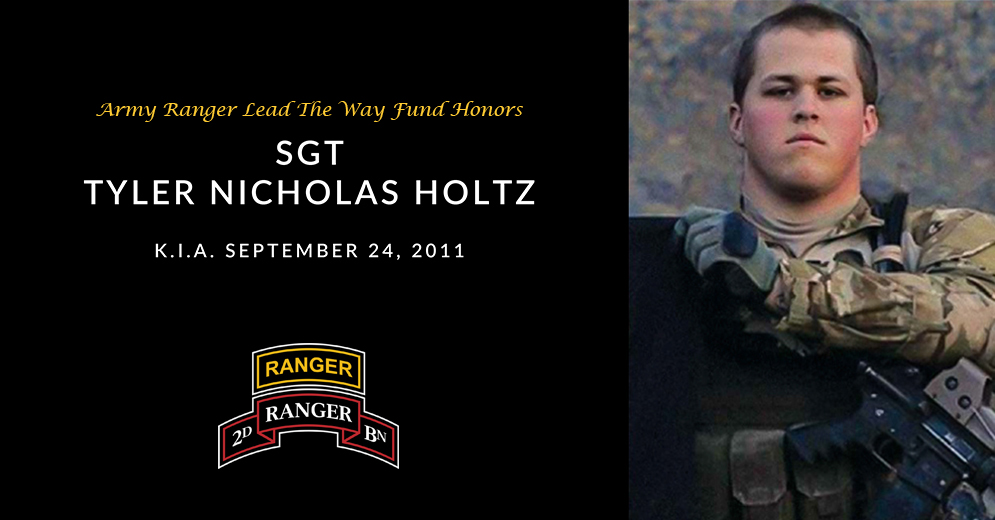 Sgt. Tyler Nicholas Holtz, 22, was killed by enemy forces during a heavy firefight while conducting combat operations in Wardak Province, Afghanistan. He was leading an assault against an enemy position when he was mortally wounded by small arms fire.

Holtz was a team leader assigned to Company B, 2nd Battalion, 75th Ranger Regiment at Joint Base Lewis McChord, Wash. He was on his fourth deployment to Afghanistan in support of the War on Terror.

Holtz was born Oct. 1, 1988 in Orange City, Calif. After graduating from Mater Dei High School, he enlisted in the U.S. Army in October 2007 from San Diego, Calif. Holtz completed One Station Unit Training at Fort Benning, Ga., as an infantryman. After graduating from the Basic Airborne Course there, he was assigned to the Ranger Assessment and Selection Program also at Fort Benning.

Holtz graduated from the Ranger Assessment and Selection Program and was then assigned to Company B, 2nd Bn., 75th Ranger Regiment in July 2008, where he served as a rifleman and a Ranger team leader.

Holtz is survived by his father Andrew Holtz of Capistrano Beach, Calif., his mother Karen Holtz, and his three brothers Luke, Hayden, and Michael all of Dana Point, Calif.

As a Ranger, Holtz selflessly lived his life for others and distinguished himself as a member of the Army’s premier direct action raid force and fought valiantly as he served his fellow Rangers and our great Nation.