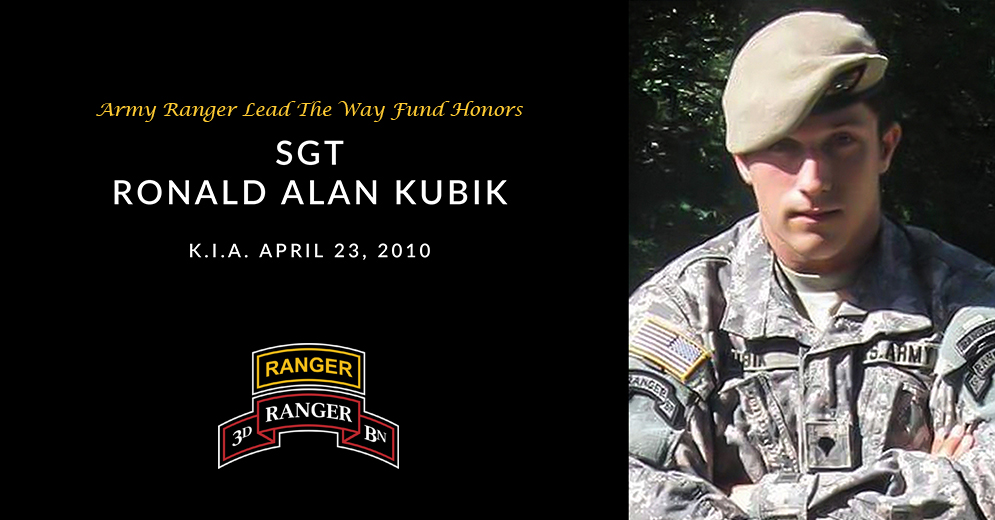 Sgt. Kubik was seriously wounded in an engagement with an enemy force in Logar Province, Afghanistan. He later succumbed to his wounds.

He was on his third deployment in support of the War on Terror with one previous deployment to Iraq and one to Afghanistan.

After graduating from high school, Sgt. Kubik enlisted in the U.S. Army from his hometown of Manchester, N.J. in March 2007. He completed Infantry One Station Unit Training, the Basic Airborne Course and the Ranger Indoctrination Program at Fort Benning, Ga.

After graduating from the Ranger Indoctrination Program, he was then assigned to Company D, 3rd Battalion, and 75th Ranger Regiment in October 2007 where he served as an assistant machine gunner and a team leader.

He was posthumously awarded the Purple Heart, the Silver Star, the Bronze Star, and the Meritorious Service Medal.

He is survived by his father Ronald A. Kubik of Hazlet, N.J., his mother Eileen M. Kubik of Point Pleasant, N.J., and his sisters Mary K and Amy L. Kubik of Manchester, N.J.

As a Ranger, Sgt. Ronald Kubik selflessly lived his life for others and distinguished himself as a member of the Army’s premier light-infantry unit, continuously deployed in support of the Global War on Terror, and fought valiantly as he served his fellow Rangers and our great Nation.