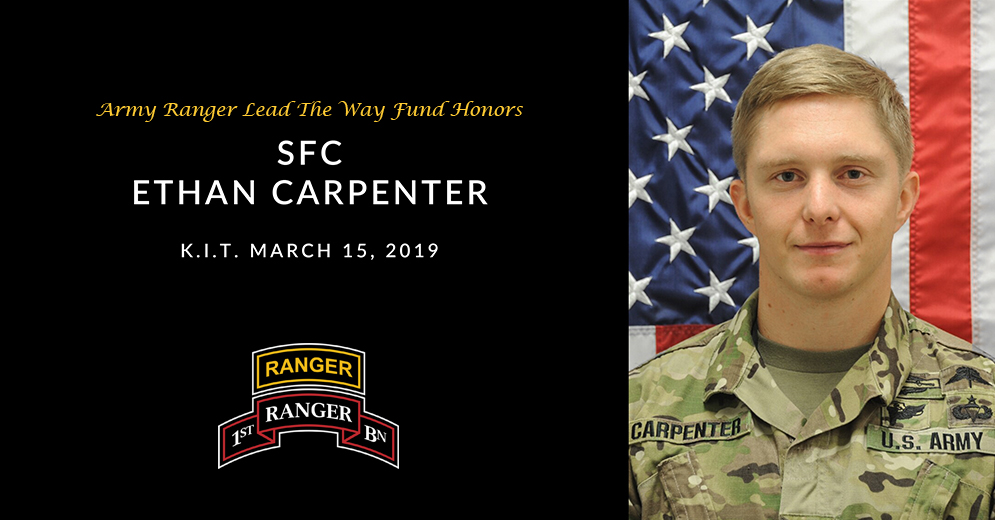 A native of Trumansburg, New York, Carpenter entered the Army, August 31, 2007. He completed One Station Unit Training, Basic Airborne Course, and the Ranger Indoctrination Program at Fort Benning, Georgia. He was then assigned to 1st Battalion, 75th Ranger Regiment, Hunter Army Airfield as an assistant machine gunner; he then progressed to team leader and squad leader.

Carpenter deployed to combat eight times, once to Iraq and seven to Afghanistan before he was assigned as a reconnaissance specialist with the Regimental Special Troops Battalion, June 5, 2017.

“Sgt. First Class Ethan Carpenter was an exemplary Soldier and Ranger Leader, and a dedicated husband and father. He did the toughest jobs well and was the consummate team member when it counted the most, both in garrison training and in deployed combat. He represented our Nation’s best, and we’ll miss him dearly,” said Colonel Joseph Ewers, commander, Regimental Special Troops Battalion.

Ethan was affectionately referred to as the ‘moral compass’ for his men because of his strong faith in God and a fierce warrior who set the bar for all to achieve.

Carpenter is survived by his wife Chana, daughter Cecila; parents Charles and Kathleen Carpenter; two brothers and four sisters. Army Ranger Lead The Way Fund supported the Memorial Service for his Battalion as well as hotel and travel accommodations for family members to attend his funeral.