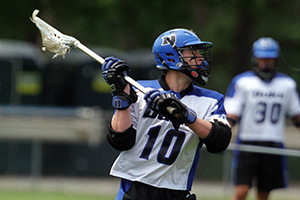 Fallen Heroes with Lacrosse Ties to Be Honored at Game Today

Foxborough, Mass. — The NCAA and the Kraft family will honor two fallen heroes on Memorial Day (May 28) prior to the 2012 NCAA Division I Men’s Lacrosse Championship Game at Gillette Stadium.

The families of U.S. Army Sgt. James J. Regan and Navy Seal LT Brendan Looney, both collegiate lacrosse players who were lost while serving their country, will be Honorary Captains for the game at 1:00 p.m. on Monday.

Army Ranger Sgt. James (Jimmy) J. Regan was assigned to Company C, 3rd Battalion, 75th Ranger Regiment when he was killed by an IED while on a mission in northern Iraq in February, 2007. Deeply affected by the terror attacks of September 11, Sgt. Regan rejected lucrative Wall Street job opportunities and law school scholarships. Sgt. Regan volunteered for military service in February, 2004 and served four tours of duty. He grew up in Manhasset, Long Island, graduated with Honors from Chaminade High School and was a High School Lacrosse All American. He played midfield for Duke University and helped lead the Blue Devils to two Atlantic Coast Conference championships and an NCAA quarterfinal appearance. The Regan family and friends have honored his spirit, his patriotism and the way he lived his life by establishing Lead the Way Fund (www.leadthewayfund.org), which supports U.S. Special Operation 75th Rangers and their families. Jimmy’s parents Mary and James Regan, and sisters Maribeth, Colleen and Michaela will serve as Honorary Captains in his honor prior to the Division 1 Championship Game.

Navy Seal LT Brendan Looney was one of nine U.S. service members to lose his life in a 2010 helicopter crash in Afghanistan. He proudly volunteered to serve his country, knowing full well what dangers lay ahead of him. He answered that call to make a difference in the world and in the fight for freedom. Brendan grew up in Owings, Md. and attended DaMatha Catholic High School before graduating from the United States Naval Academy. One of the proudest lacrosse seasons for both Brendan and his family took place during his senior season at Navy. That year, Brendan and brothers Billy and Stephen helped lead Navy to the NCAA National Championship Game played in Baltimore. Serving as Honorary Captains on Monday in Brendan’s honor will be his wife, Amy, his parents, Maureen and Kevin, and sisters Bridget, Erin and Kellie.

Fans attending Monday’s Division I championship game are encouraged to enter the stadium early in order to participate in the pre-game Memorial Day ceremonies. As part of the ceremony a large American flag will be displayed by members of the military and a flyover will be performed by the Rhode Island Air National Guard’s 143rd Airlift Wing. The 143rd Airlift Wing flies C-130 Hercules, which primarily performs the tactical portion of the airlift mission. The aircraft is capable of operating from rough, unprepared dirt strips and is the primary aircraft for aerial delivery of troops and equipment into hostile areas. The C-130 operates throughout the U.S. Air Force, serving with Air Mobility Command, Air Force Special Operations Command, Air Combat Command, U.S. Air Forces in Europe, Pacific Air Forces, Air National Guard and the Air Force Reserve Command.