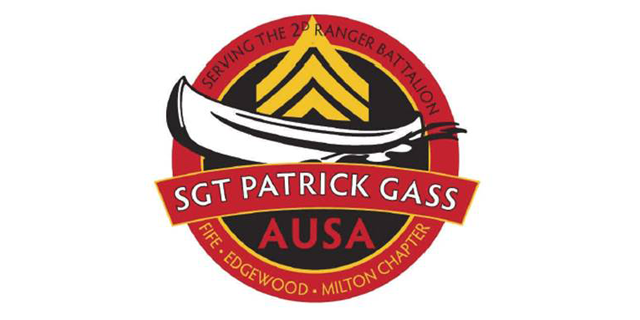 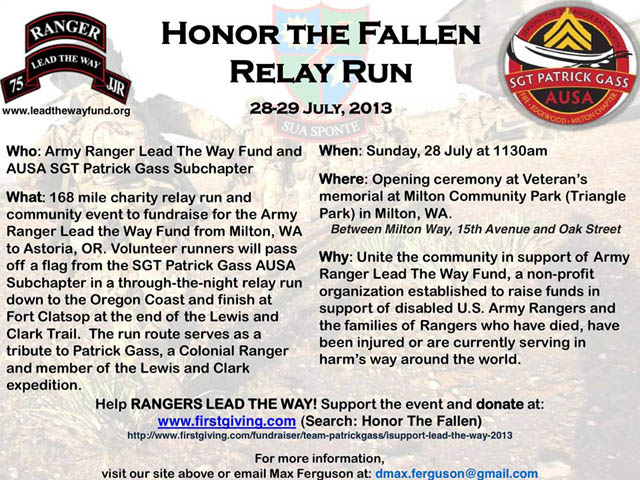 On Sunday July 28¸ 2013, The SGT Patrick Gass AUSA Subchapter, serving the 2D Ranger Battalion, will proudly embark on a 168-mile “Honor the Fallen Relay Run,” on behalf of the Army Ranger Lead The Way Fund, and in honor of all Fallen Rangers from the 2D Battalion and the family they left behind. The fundraising event is scheduled to start at the Veteran’s Memorial in Milton, Washington and will continue through the night until the team reaches Fort Clatsop, Oregon, at the end of the Lewis and Clark trail, on July 29, 2013. The official route includes: Milton to Dupont (23.8 miles); Dupont to Olympia (17.9 miles); Olympia to Rochester (15.6 miles); Rochester, WA to Astoria, OR (111 miles).  The official Sendoff Ceremony, hosted by the VFW Post 11401 and city of Milton, will be held at the Milton Community Park at 11:30 am on July 28, 2013.

Donations for the run will go directly to Army Ranger Lead The Way Fund, a non-profit organization established to raise funds in support of families of U.S. Army Rangers who have died, have been disabled or who are currently serving in harm’s way around the world.  The funds raised provide spouses and children of deceased, disabled or active duty Rangers with assistance for health and wellness programs and other financial aid programs, beyond what the government can offer. Army Ranger Lead The Way Fund was created in honor of Sgt. James J. Regan who was killed in Iraq while serving with Charlie Company, 3rd Battalion, 75th Ranger Regiment.

SGT Patrick Gass, the namesake of the AUSA Subchapter, served as a Colonial Ranger before volunteering to participate in the Lewis and Clark expedition to serve as the team’s head carpenter. When the Senior NCO (Non-Commissioned Officer) on the expedition died, SGT Gass was selected to step up and serve as the Senior NCO. His carpentry skills were also vital to the “Corps of Discovery” as he made canoes, shelters, and likely lead the building of Fort Clatsop, where the expedition stayed the winter of 1805-1806. On the return trip home, Captains Lewis and Clark each led reconnaissance teams along the route while SGT Patrick Gass led the remainder of the team back East.

This event ties the legacy of SGT Patrick Gass with the AUSA Subchapter named in his honor – by starting at the Milton Veteran’s Memorial where the subchapter was founded.  Runners will run using the SGT Patrick Gass flag as their baton along the route, bringing the flag down to the end of the Lewis and Clark Trail at Fort Clatsop in a special tribute to former Ranger, explorer, and namesake to the organization now dedicated to supporting 2D Ranger Battalion.

To donate in support of this event, please visitwww.leadthewayfund.org (click Support our Participants/ Team Patrick Gass) OR www.firstgiving.com (Search: Honor The Fallen).

If you are interested in supporting or helping promote the event, please contact: [email protected]. For more information about Army Ranger Lead The Way Fund please visit www.leadthewayfund.org