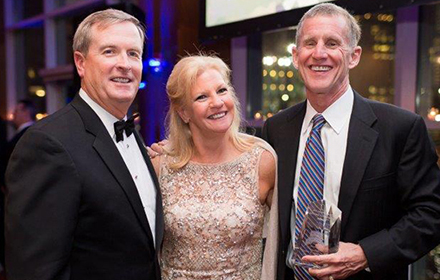 A one-of-a-kind commander with a remarkable record of achievement, General Stan McChrystal is
widely praised for creating a revolution in warfare that fused intelligence and operations. He is also
known for developing and implementing the counter-insurgency strategy in Afghanistan and for
creating a comprehensive counter-terrorism organization that revolutionized the way military
agencies interact and operate.

A four-star general, he was the former commander of U.S. and international forces in Afghanistan and
the former leader of Joint Special Operations Command (JSOC), which oversees the military’s most
sensitive forces. His leadership of JSOC is credited with the 2003 capture of Saddam Hussein and the
2006 location and killing of Abu Musab al-Zarqawi, the leader of al-Qaeda in Iraq.

He is also the author of the bestselling leadership books, My Share of the Task: A Memoir and Team
of Teams: New Rules of Engagement for a Complex World. Exclusively represented by Leading
Authorities speakers bureau, McChrystal, a former Green Beret, is known for his candor, innovative
leadership, and going the distance. Called “one of America’s greatest warriors” by Secretary of
Defense Robert Gates, few can speak about leadership, teamwork, and international affairs with as
much insight.

Thirty-four years of service. The son and grandson of Army officers, McChrystal graduated from West
Point in 1976 and trained at the Special Forces School in Fort Bragg, North Carolina. He was later
commissioned as an infantry officer and spent much of his career commanding special operations and
airborne infantry units. During the Persian Gulf War, McChrystal served in a Joint Special Operations
Task Force and commanded the 75th Ranger Regiment.

He also completed year-long fellowships at Harvard’s John F. Kennedy School of Government in 1997
and at the Council on Foreign Relations in 2000. He was promoted to brigadier general in 2001. In
2002, he was appointed chief of staff of military operations in Afghanistan. Two years later,
McChrystal was selected to deliver the nationally televised Pentagon briefings about military
operations in Iraq. From 2003-2008, he commanded JSOC and was responsible for leading the
nation’s deployed military counterterrorism efforts around the globe, assuming command of all
international forces in Afghanistan in June 2009. President Obama’s order for an additional 30,000
troops to Afghanistan was based on McChrystal’s assessment of the war.

Supporting military families and national service. McChrystal retired from the military in 2010. He
now serves on the board of directors for JetBlue Airways, Navistar, and the Yellow Ribbon Fund. He is
also the chairman of the board for Siemens Government. A passionate advocate for national service
and veterans’ issues, Stan is the Chair of the Board of Service Year Alliance. In this capacity, he
advocates for a future in which a year of full-time service—a service year—is a common expectation
and opportunity for all young Americans. He is also a senior fellow at Yale University’s Jackson
Institute for Global Affairs, where he teaches a popular course on leadership.

From the battlefield to the boardroom. General McChrystal founded the McChrystal Group in
January 2011 in order to capture the lessons he and his colleagues learned and translate them to
business. Recognizing that companies today are experiencing parallels to what he and his colleagues
faced in the war theater, General McChrystal established this advisory services firm to help
businesses challenge the hierarchical, command and control approach to organizational
management. McChrystal Group’s mission is to help organizations build adaptable teams that are
capable of solving the world’s most complex leadership challenges. The group helps shape
organizational functionality and culture through a set of principles, proven process, and leadership
behaviors, based on General McChrystal’s experiences and the lessons captured in their book, Team
of Teams. McChrystal Group has worked with global Fortune 1000 companies across sectors in order
to transform their organizations and improve their performance.

General McChrystal resides in Alexandria, Virginia, with his wife of 37 years, Annie.