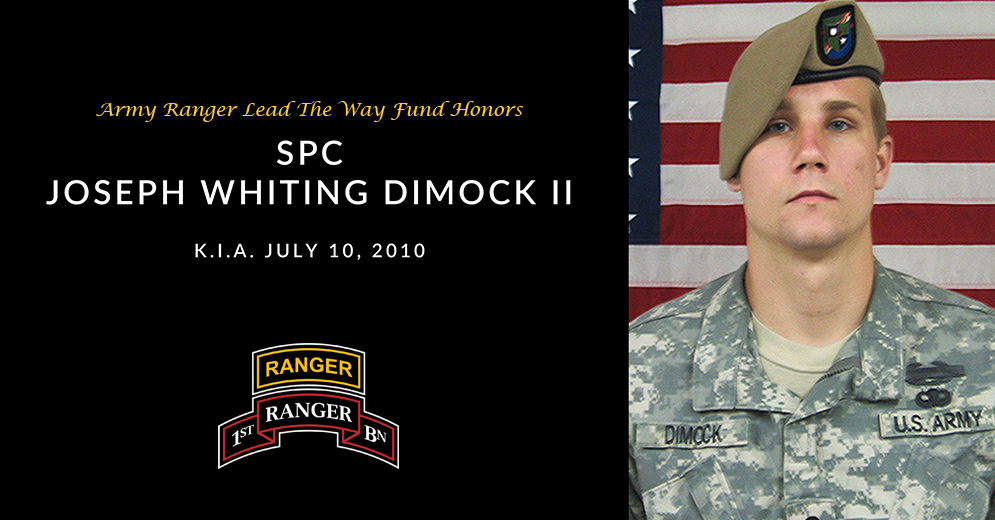 Spc. Joseph Whiting Dimock, II, was a rifleman assigned to 1st Battalion, 75th Ranger Regiment at Hunter Army Airfield, Ga. He was born on May 25, 1989 in Libertyville, Ill.

Dimock died in Afghanistan, when an explosion occurred in an ammunition holding facility while conducting an inventory.

He was on his third deployment with one previous deployment to Afghanistan, and one to Iraq.

After graduating from Warren Township High School in Gurnee, Ill, Dimock enlisted in the U.S. Army from his hometown of Wildwood, Ill., in August 2007.

His awards and decorations include the Ranger Tab, Combat Infantryman Badge, and the Parachutist Badge.

He was posthumously awarded with the Bronze Star Medal and Army Commendation Medal.

Dimock is survived by his parents Joseph and Ellen Dimock of Wildwood, Ill.

As a Ranger, Joseph Whiting Dimock, Ill, lived his life in service of others and distinguished himself as a member of the Army’s premier light-infantry unit, continuously deployed in support of the Global War on Terror, valiantly serving his fellow Rangers and our great nation.