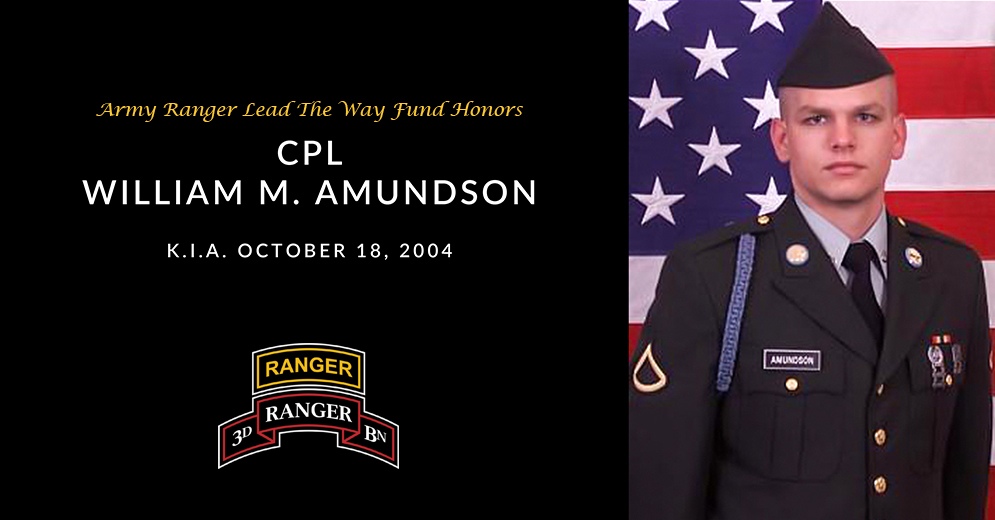 He was killed Oct. 18, 2004, during a ground assault force infiltration in eastern Afghanistan when the Ground Mobility Vehicle he was riding in rolled over.

A native of The Woodlands, Texas, Cpl. Amundson enlisted in the Army in May 2001 and completed One Station Unit Training at Fort Benning as an indirect fire infantryman. After graduating from the Basic Airborne Course there, he was assigned to the Ranger Training Detachment, 75th Ranger Regt.

He graduated from the Ranger Indoctrination Program in November 2001 and was then assigned to 3rd Bn., 75th Ranger Regt. He served there as a 60 mm mortar gunner.

He is survived by his parents, Michele Sanderson of Montgomery, Texas, and William Amundson Sr. of Plano, Texas.

As a Ranger, Cpl. William Amundson distinguished himself as a member of the Army’s premier light infantry unit, traveled to all corners of the world in support of the Global War on Terrorism and fought valiantly to “uphold the prestige, honor, and high ‘esprit de corps’” of the Ranger Regiment.