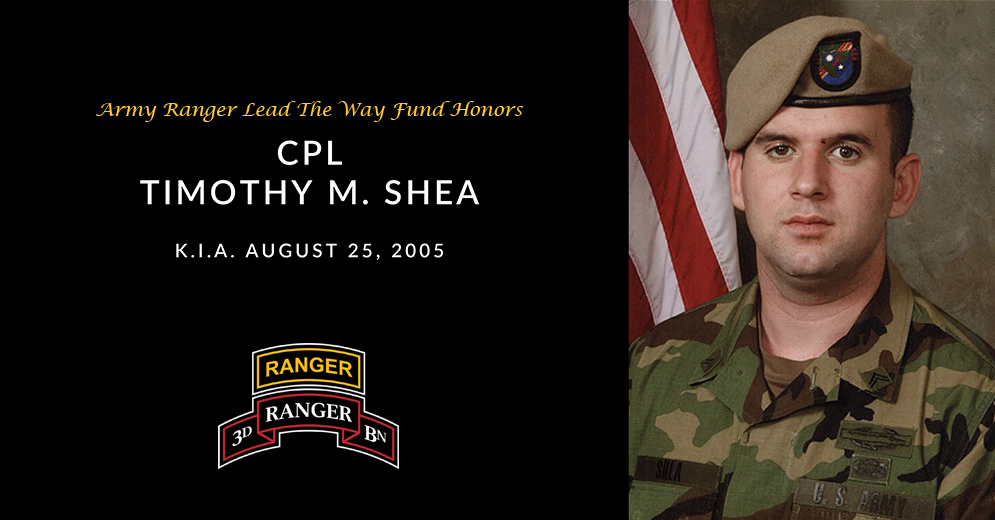 He was killed in action on Aug. 25, 2005, while conducting combat operations in support of Operation Iraqi Freedom after an Improvised Explosive Device detonated near his vehicle.

His awards and decorations include the National Defense Medal, the Global War on Terrorism Expeditionary Medal, the Global War on Terrorism Service Medal, the Army Service Ribbon, the Combat Infantryman Badge, the Basic Parachutist Badge and the Ranger Tab. He was posthumously promoted to the rank of corporal and awarded the Bronze Star Medal for valor, the Purple Heart, the Meritorious Service Medal and the Good Conduct Medal.

Shea is survived by his parents, William and Mary Shea, also of Sonoma, Calif., and a sister, Sara Shea Frank, of Seattle, Wash.

As a Ranger, Shea distinguished himself as a member of the Army’s premier light infantry unit, traveled to all corners of the world in support of the Global War on Terrorism and fought valiantly to “uphold the prestige, honor, and high ‘esprit de corps’” of the Ranger Regiment.