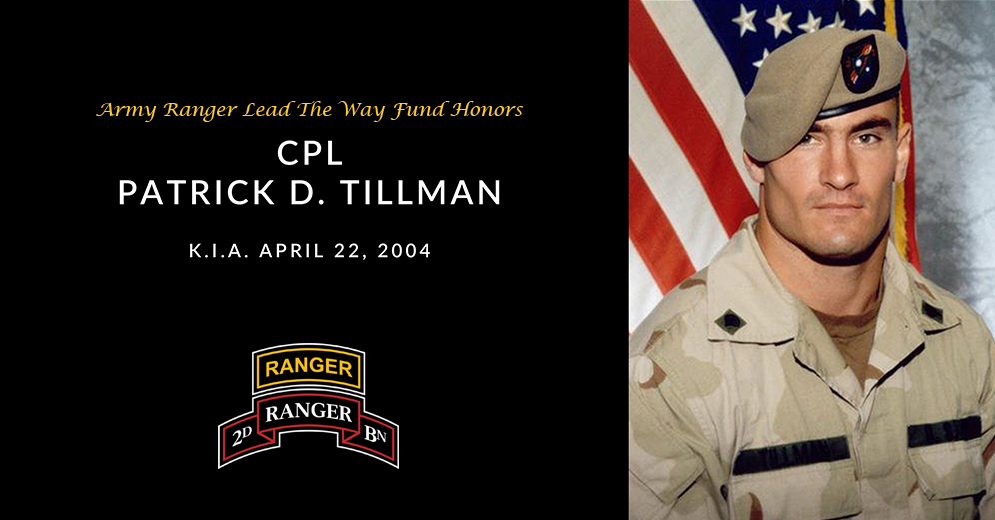 In the prime of a stellar football career, which included four years at Arizona State University on athletic scholarship and four years as a defensive back with the National Football League’s Arizona Cardinals, Pat Tillman walked away from a multiyear, multimillion dollar football contract to serve his country as a Soldier in the U.S. Army.

Tillman volunteered for duty with the Army in May 2002, requesting to serve as a member of the 75th Ranger Regiment — the U.S. military’s premier light infantry fighting force.

After entering the Army in July 2002, he completed One Station Unit Training in the military occupational specialty of infantryman at Fort Benning, Ga. Tillman continued his military training at Fort Benning when he attended the Basic Airborne Course in October 2002. After earning his jump wings, he then graduated from the Ranger Indoctrination Program in December 2002.

The Tillmans both deployed several times with their Ranger battalion in support of the Global War on Terrorism and participated in combat operations in Afghanistan and Iraq.

On April 22, 2004, Pat Tillman was fatally wounded when his Ranger unit came under fire during combat operations in southeastern Afghanistan. After he was medically evacuated from the scene, he was pronounced dead by U.S. officials at approximately 11:45 a.m. Eastern Standard Time.

He is survived by his wife, Marie, of San Jose, Calif.; his parents, Patrick K. and Mary L. Tillman, also of California; and his brothers, Kevin and Richard.

As a Ranger, Cpl. Pat Tillman distinguished himself as a member of the Army’s premier light infantry unit, traveled to all corners of the world in support of the Global War on Terrorism and fought valiantly to “uphold the prestige, honor, and high ‘esprit de corps’” of the Ranger Regiment.