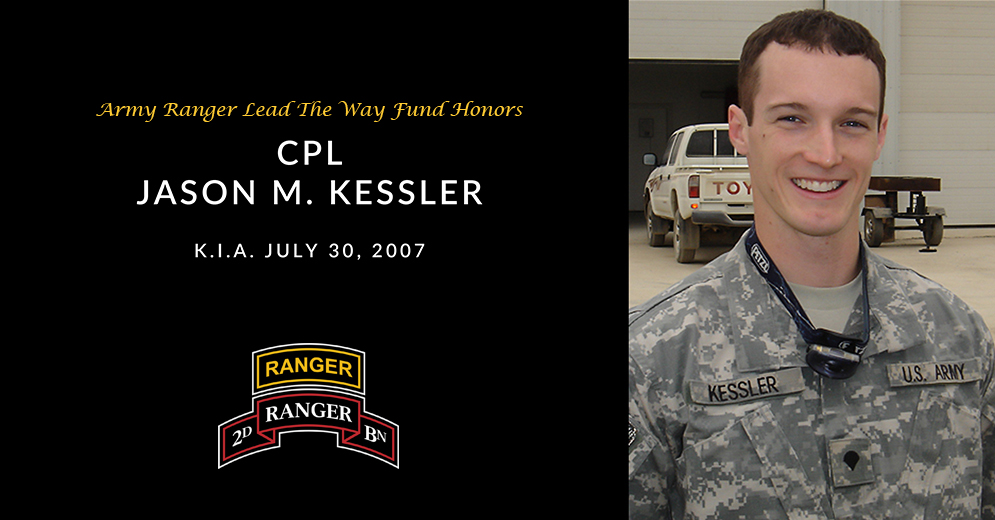 He was killed on July 30, 2007, while engaged in combat operations in northern Iraq when the tactical vehicle he was riding in was struck by a rocketpropelled grenade. This was his third deployment in support of Operation Iraqi Freedom.

After graduating high school in Mount Vernon, Wash., Kessler attended The Masters College, Santa Clarita, Calif., and earned a bachelor of arts in biblical studies. He was continuing his education at the University of Washington, Seattle Campus with emphasis on philosophy.

Kessler enlisted in the Army from his hometown of Mount Vernon in January 2005 and completed One Station Unit Training at Fort Benning, Ga., as an infantryman. After graduating from the Basic Airborne Course there, he was assigned to the Ranger Indoctrination Program also at Fort Benning.

He graduated from the Ranger Indoctrination Program in June 2005 and was then assigned to 2 nd Bn., 75 th Ranger Regiment. He served there as an Automatic Rifleman.

He is survived by his parents, C. Michael and Pamela K. Kessler and his brother Mark, sister Katelyn all of Mount Vernon, and longtime girl friend Erin Jacobson of Kirkland, Wash.

As a Ranger, Kessler distinguished himself as a member of the Army’s premier light infantry unit, traveled to all corners of the world in support of the Global War on Terrorism and fought valiantly to “uphold the prestige, honor, and high ‘esprit de corps’” of the Ranger Regiment.