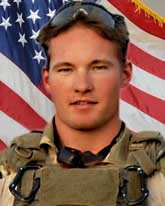 Cpl. Benjamin S. Kopp, was a rifleman assigned to 3rd Battalion, 75th Ranger Regiment at Fort Benning, Ga. He was born on Jan. 20, 1988, in Minneapolis, Minn.

Kopp was seriously wounded during a combat operation in southern Afghanistan, July 10. Kopp was medically evacuated through Landstuhl Regional Medical Center in Germany to Walter Reed Medical Center,Washington, D.C., where he died as a result of his wounds July 18. His unit hadattacked into a Taliban safe haven where they fought a determined enemy from multiple directions for several hours, resulting in the killing of more than 10 Taliban fighters.

Kopp was on his third deployment in support of the War on Terror with two previous deployments to Iraq.

He graduated from the Ranger Indoctrination Program and was then assigned to Company C, 3rd Bn., 75th Ranger Regiment June 2007 where he served as a Rifleman.

Kopp is survived by his mother Jill Stephenson of Rosemont, Minn., and his father Duane Kopp of Minnetonka, Minn.