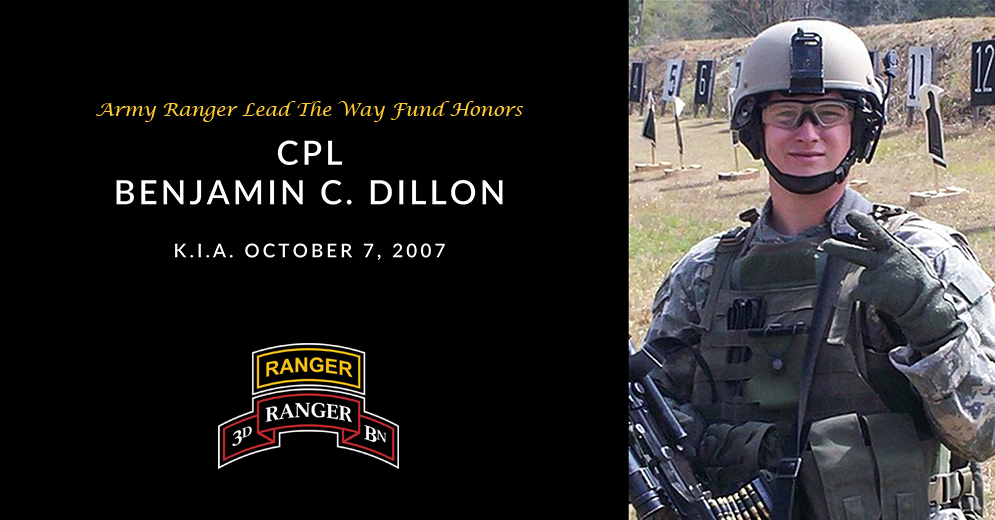 He was killed on Oct. 7, 2007, while engaged in combat operations against known enemies of the United States of America in Northern Iraq. He was a veteran of operations Enduring and Iraqi Freedom.

After graduating Southeast High School in Edinburg, Ohio, Dillon enlisted in the Army from his hometown of Rootstown, Ohio, in September 2004 and completed One Station Unit Training at Fort Benning as an infantryman. After graduating from the Basic Airborne Course there, he was assigned to the Ranger Indoctrination Program also at Fort Benning.

He graduated from the Ranger Indoctrination Program in March 2005 and was then assigned to 3 rd Bn., 75 th Ranger Regiment. He served there as a rifleman, grenadier, automatic rifleman, machine gunner and gun team leader. His last assignment was as a gun team leader.

He was posthumously awarded the Bronze Star with V Device, the Purple Heart and Meritorious Service Medal.

He is survived by his parents Terry and Linda Dillon, and brothers Nicholas and Steven all of Rootstown.

As a Ranger, Cpl Benjamin C. Dillon distinguished himself as a member of the Army’s premier light infantry unit, traveled to all corners of the world in support of the Global War on Terrorism, and fought valiantly to “uphold the prestige, honor, and high ‘esprit de corps’” of the Ranger Regiment.