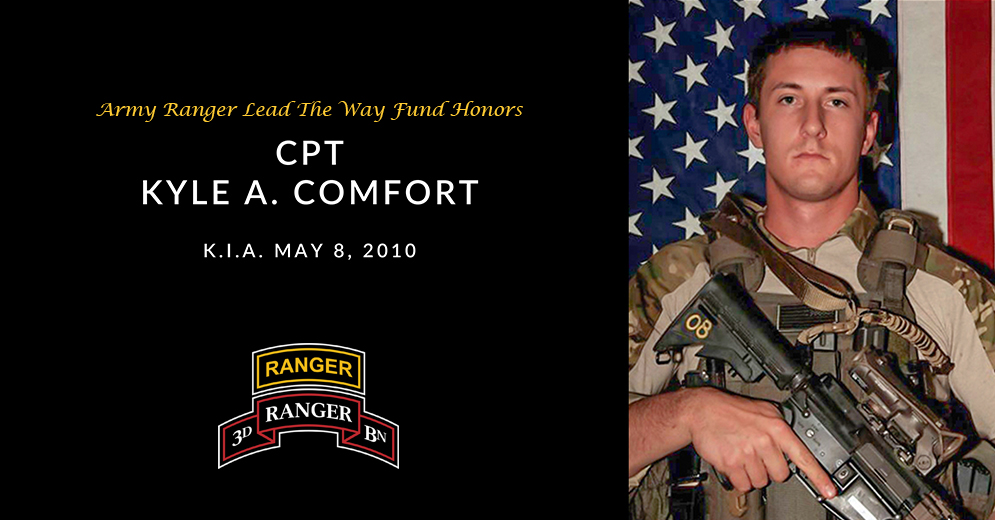 CPT Kyle Aaron Comfort, 27, was a Fire Support Officer assigned to Company D, 3rd Battalion, 75th Ranger Regiment at Fort Benning, Ga. He was born on Oct. 17, 1982 in Alabama. He was killed in action on May 8, 2010 during a combat operation in Helmand Province, Afghanistan.

After graduating from Jacksonville State University, Jacksonville, Ala., in 2006 with a Bachelor of Science Degree in Criminal Justice, Comfort was commissioned as a Field Artillery Officer.

He initially served as a company Fire Support Officer and Platoon Leader with the 2nd Battalion, 502nd Infantry Regiment and 1st Battalion, 320th Field Artillery Regiment, both 101st Airborne Division, Fort Campbell, Ky. He deployed to Iraq from October 2007 to November 2008 with the 101st.

He then completed assessment and selection for assignment into the 75th Ranger Regiment in February 2010 where he subsequently served as a Fire Support Officer for Company D, 3rd Battalion, 75th Ranger Regiment stationed at Fort Benning, Ga. He was on his first deployment to Afghanistan. Comfort‘s military education includes the Field Artillery Officer Basic Course, Air Assault Course, Basic Airborne Course and the U.S. Army Ranger Course.

As a Ranger, Comfort selflessly lived his life for others and distinguished himself as a member of the Army‘s premier light-infantry unit, continuously deployed in support of the Global War on Terror, and fought valiantly as he served his fellow Rangers and our great Nation.

He is survived by his wife Brooke and their daughter Kinleigh of Jacksonville, AL; and his mother Ellen Comfort of Anniston, AL. Army Ranger Lead The Way Fund continues to engage with Brooke and Kinleigh to ensure there is no shortfall for their needs. We provided financial support for such things as summer camp and a new air conditioning compressor.  We also presented Brooke and Kinleigh with a hand-painted portrait of Kyle, commissioned by the American Fallen Soldier’s Project, at our annual Gold Star Memorial event.