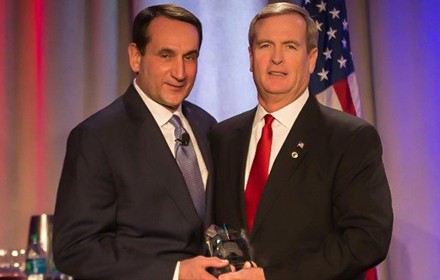 Winning seasons, superb graduation rates for his players and a basketball team that is as close as family, are all attributes that reflect on the man who is now in his 36th season as the head coach of the Blue Devils, Mike Krzyzewski. Although some still stumble with pronouncing and spelling his name, when people speak of the highest level of success in the college basketball world, the name Krzyzewski (Sha-shef-skee) immediately comes to mind.

Coach K solidified his status in the upper echelon of coaching on Nov. 15, 2011, when he became the winningest coach in college basketball history with a 74-69 Duke win over Michigan State at Madison Square Garden. Krzyzewski returned to MSG on January 25, 2015, to achieve another historic milestone when he became the first NCAA Division I men’s basketball coach to reach 1,000 career wins with a 77-68 victory over St. John’s.

He began his coaching career in 1975 as the head basketball coach at Army, where he played from 1966 to 1969 under Bob Knight. Since 1980, he has served as the head men’s basketball coach at Duke University where he led the Blue Devils to five NCAA Championships, 12 Final Fours, 12 ACC regular season titles, and 13 ACC Tournament championships. Krzyzewski is also the coach of the United States men’s national basketball team, which he led to two gold medals at the 2008 Summer Olympics and 2012 Summer Olympics. He was the head coach of the American team that won the gold medals at the 2010 FIBA World Championship and the 2014 FIBA World Championship. He was also an assistant coach for the 1992 “Dream Team”.