Change of Command at the 1st Battalion 75th Ranger Regiment 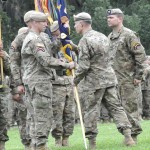 The outgoing commander, Col. Michael Foster, passed the mantle of leadership to Lt. Col. Robert Harman on the park’s grassy field.  Eight hundred Rangers stood proudly in formation and watched the transition of power, along with Savannahians who lined the sidewalks with their children and dogs.

“There’s no place as special as Savannah,” said the new commander, Harman, who served previously as the battalion liaison officer and the executive officer of the 1st Battalion, 75th Ranger Regiment.  “This community has always embraced Rangers and made us feel at home.”

In his final remarks from the podium, the former 1st Battalion, 75th Ranger Regiment commander, Foster, stated the same praise for Savannahians and thanked them for the hospitality given his family over the last 28 months.   He spoke emotionally as he addressed the community and his Rangers before leaving for his new assignment at Vicenza, Italy as the 173rd Airborne Brigade commander.

“These Rangers are a lethal fighting force,” he said. “I’ve seen them perform great acts of courage and violence but I’ve also seen them show compassion that almost defies explanation.  Plain and simple, if you stand on a battlefield in opposition, it’s the last thing you’ll do.  It may be immediate or it may take some time but you’ll not live through the experience or more likely, not make it through the night.”

The 1st Battalion, 75th Ranger Regiment has employed those lethal combat skills since 2001, while deployed to combat operations in Iraq and Afghanistan over 16 times, taking the fight to the enemy in order to preserve our Nation’s freedoms. While targeting high value marks across Iraq and Afghanistan, the battalion has conducted more than 2,500 raids during its 16 combat deployments, resulting in the capture or killing of thousands of key al-Quaeda, Taliban and other insurgent leaders.

“These are not ordinary men,” Foster continued. “They are adaptable and can take on any shape or coloration temporarily, if that’s what the mission requires.  The whole of our tribe is a power that is so much greater than the sum of its parts.”

Foster also commended the 451 Ranger wives and credited them for their contribution to the ‘tribe.’

“Our ladies carry on with the grace and dignity that we do not posses,” he said. “They raise our children, handle emergencies, make great decisions and care for one another.”

Foster praised several of the wives individually for their leadership and strength, calling them ‘angels in disguise.’  Before leaving the podium, he also praised the 10 Rangers who made the highest sacrifice to the Nation with their lives.

“Like all great warrior tribes, these men practiced the dominance of honor,” he said. “They valued loyalty and cohesion; they had the capacity to endure hardship and they eventually paid the ultimate price.  We will not forget them.”

Foster closed by thanking the men of his battalion for the opportunity to be a member of the ‘warrior tribe’ of Rangers.

“I’ve taken so much more from you than I’ve given,” he said. “This is a debt on I can never fully repay.  Thanks for allowing me to walk by your side these past months.  The door to my house is always open.”