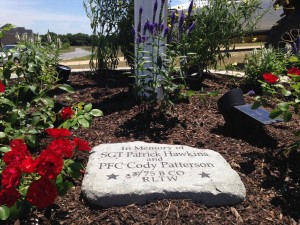 I decided to run this race for something bigger than myself, to honor those in the Ranger Regiment, their families and our fallen Rangers especially Spc. Cody Patterson, Sgt. Patrick Hawkins KIA October 2013.

Flashback to 2013: Their 18th combat rotation into a war zone since 2001, the Rangers of 3rd Battalion Ranger Regiment deployed to Kandahar Province, Afghanistan. On a mission not long into their deployment they unknowingly landed on a mine field. The occupants of the complex were aware of their arrival and willing to sacrifice themselves to kill as many US soldiers as possible. After suicide bombers and multiple IEDs went off, 4 US soldiers were killed and countless others were injured. The mission was a mass casualty. Yet, heroes emerged that night, from running through mine fields with complete disregard for their own safety to pull the injured out of harms way, provide life saving care on the battlefield, crawling on hands and knees to detect explosives in the dirt in order to get to those injured to flying back home with the fallen to return them to US soil and their families. That’s what these men did that night and the days following. That’s what makes them extraordinary.

Since then 40 purple hearts, 1 Silver Star, 2 Distinguished Service Crosses(second only to the medal of honor), 11 Bonze Stars with Valor, and 18 Army Commendation Medals with Valor have been awarded to the soldiers from that night.

The Rangers of 3rd Battalion, Bravo Company, have not only become friends, but family to me and Gerard. The Ranger community is unlike any other group of people you will ever meet. From the first “Hello, nice to meet you,” they are there for you, today, tomorrow and always.

I ask you to consider making a donation of any size to this great foundation. You can be sure your money will go directly to those in the Ranger Regiment. I can’t thank you enough!