Army Sgt. 1st Class Cory Remsburg, who was recognized at President Barack Obama’s State of the Union address, received a hero’s award Thursday at the Bellagio.

The 2014 Homer Deakins award, given by Ogletree Deakins, recognizes Remsburg for “selfless and courageous action” that demonstrates the true spirit of giving. It comes with $10,000 he said he will donate to the Lead The Way Fund, Inc., a nonprofit organization that raises funds for disabled Army Rangers and families of Ranger who have died, are injured or currently serving.

Remsburg, of Phoenix, was nearly killed in a 2009 roadside bomb attack in Afghanistan on his 10th overseas deployment.

“It was an honor to be the face of every wounded warrior,” Remsburg said after receiving a standing ovation at the State of the Union address.

“His comrades found him in a canal face down, underwater, shrapnel in his brain. For months, he lay in a coma. And the next time I met him, in the hospital, he couldn’t speak, he could barely move,” Obama said.

“Over the years, he’s endured dozens of surgeries and procedures, hours of grueling rehab everyday. Even now, Cory’s still blind in one eye,” Obama said. “He still struggles on his left side. But slowly, steadily, with the support of caregivers like his dad Craig and the community around him, Cory has grown stronger.”

Newtown – Newtown resident Jason Brady, a dedicated trail and ultramarathon runner, is set to run the Peak 100 Mile Snowshoe Race in Pittsfield, VT from Feb. 28 to March 1 in an effort to raise funds for the Army Ranger Lead the Way Fund, a military charity.

“I love to challenge myself, especially in trail and ultramarathon running,” says Brady, a dedicated husband and father of two. “As a former Army Ranger myself, my time in the 1st Ranger Battalion was extremely rewarding, most of all because of the individuals I served with.

“Rangers and their families give so much and I feel strongly about the fantastic charitable work that the Army Ranger Lead the Way Fund does. The organization really stepped up during the government shutdown for Ranger families that did not receive death benefits and other services during that time. They are unique because they assist active and wounded U.S. Army Rangers and their families with recovery, health, wellness and other programs where government funding falls short.”

Army Ranger Lead The Way Fund, Inc. is a 501(c)3 non-profit organization established to raise funds in support of disabled U.S. Army Rangers and the families of Rangers who have died, have been injured or are currently serving in harm’s way around the world. Army Ranger Lead The Way Fund, Inc. will provide spouses and children of deceased, disabled or active duty Rangers with assistance for health and wellness programs and other services determined to be vital to the family’s well-being, beyond what the government can offer.

All donations are tax deductible to the fullest extent of the law and contributors will receive a letter acknowledging their donation from the Ranger Lead the Way Fund, Inc.

What an amazing job by all of our NYC 2013 Marathon Runners on Sunday, November 3rd!!! Our runners were an incredible and inspiring group of people and we were so proud to have them represent us.  We also can’t say enough about all of the family and friends who supported them and, in turn, supported us. It is because of you that we continue to be able to provide support 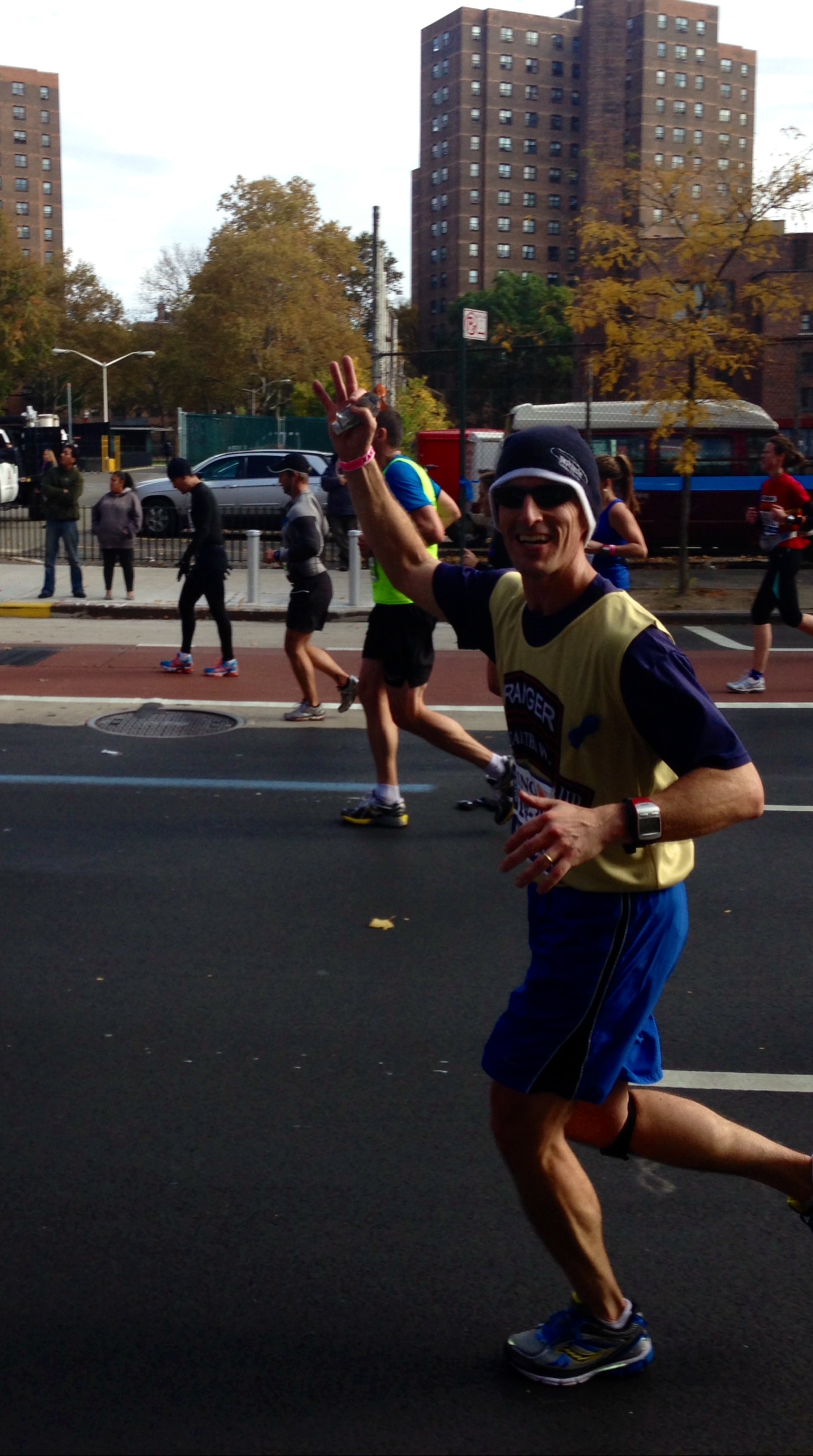 our Rangers and their families when they need us.

A host of nonprofit groups provided nearly $1.1 million and offers of additional help when the government shutdown cut aid to troops and their relatives, most notably 29 families whose uniformed loved ones died during the closure — some in combat.

The largest commitment was $700,000 divided among 28 of the families by the Fisher House Foundation, a group that builds residences on military hospital grounds for use by the relatives of casualties. The foundation is waiting for contact information on the last family, says spokesperson Jody Fisher.

In addition, a small Long Island-based nonprofit that assists Army Rangers has paid out nearly $100,000, according to Robert Hotarek, president of Lead the Way Fund.

The Navy-Marine Corps Relief Society provided more than $194,000 in financial assistance to 137 current or retired sailors, Marines and their families impacted by the shutdown, says Shelley Marshall, communications officer for the group. The money went for such expenses as travel costs for families visiting wounded or injured service members or traveling to Dover, Del. to meet remains of deceased troops, she said.

Army Emergency Relief provided $87,000 to 42 soldiers and their families during the shutdown for issues ranging from rental assistance to travel costs to moving expenses, says spokesman Guy Shields.

Lead the Way Fund stepped in after two Army Rangers, along with two other soldiers were killed during a night mission Oct. 6 against a compound in southern Afghanistan.

A suicide bomber detonated an explosive vest and other hidden bombs exploded as Rangers closed in during that assault on a compound, says Lt. Col. Brian DeSantis, a spokesman for the 75th Ranger Regiment.

“Those (nonprofit) organizations — we, really, as the Ranger Regiment and, really, as a country owe them a debt of gratitude, because they were able to support four families that had just experienced a loss,” DeSantis says. “(They) banded together to make sure that four Gold Star families got everything they needed through that very difficult time.”

The Fisher House assistance was in the form of $25,000 “gifts” to those four families and the families of 25 other troops who died during the government shutdown from Oct. 1-16. Lead the Way Fund offered assistance for burial and/or travel costs for families of the four soldiers who died in Oct. 6 attack.

The shutdown prevented the Pentagon from providing an immediate $100,000 “death gratuity” to families of service members who died or were killed. Military funds for transporting families to meet the returned remains of their loved ones or to visit them at military hospitals were also canceled.

Congress eventually reinstated the death gratuity and other support payments before the shutdown ended.

The Pentagon this week identified eight other nonprofit groups that offered or provided assistance during the government shutdown. Officials in several of the groups said donors were clamoring to donate after hearing news of the suspended death gratuities.

JPMorgan Chase also offered assistance during the shutdown. The financial institution previously founded a jobs hiring program that with a coalition of companies has hired 92,869 veterans since 2011, says spokesperson Shannon O’Reilly.

A Long Island charity has stepped in to cover funeral and other costs for the loved ones of American soldiers killed in an Oct. 6 attack in Afghanistan.

Since the attack, which killed four U.S. soldiers and seriously wounded more than a dozen others, the Manhasset-based Lead The Way Fund has provided some $50,000 in emergency cash to help the families of two of the soldiers make funeral arrangements, said founder James Regan.

Regan, of Manhasset, said the fund provided another $30,000 to help the loved ones of injured soldiers cover the travel, lodging and other costs incurred as they have rushed to military hospitals where the soldiers have been treated.

“There is a dramatic need to get this done,” said Regan, whose son, James, was killed in Iraq in 2007.

Families of troops slain in battle typically receive a $100,000 “death gratuity” from the federal government to help cover funeral and other costs not otherwise borne by the military. But until the Senate passed a bill Thursday lifting the shutdown ban on payments, families of the Oct. 6 bombing had to find a way to cover expenses on their own.

Regan said his charity has been offering assistance to the families of Army Rangers since his son, James, 26, a member of the Army’s 3rd Ranger Battalion, 75th Regiment, died in an Iraqi bomb blast.

So far, his organization has distributed more than $1 million in donated funds, Regan said.

“It’s to honor Jimmy, first of all,” Regan said. “To honor a son who served his country.”

Melissa Albaugh, a family coordinator with the 1st Ranger Battalion, in Savanna, Ga., said because members of military communities are bonded by the common experience of worrying about the safety of loved ones, they often depend on nonrelatives for support when tragedy strikes.

Since the government cannot legally pay for the expenses of nonrelatives, she said, funds from Lead The Way have frequently allowed grieving families to invite comforting friends along in their time of need.

For example, when his son was killed, Regan said the government paid costs incurred by the family, but not for James Regan’s fiancee, Mary McHugh. She had to pay her own way to his burial at Arlington National Cemetery.

“The military can’t cover the cost of a friend, who may be a vital part of your support network at an excruciatingly painful time in your life,” said Albaugh, whose husband was with Regan’s son when he was killed. He survived the blast.

“Lead The Way means you feel supported, and that people who understand what families are going through can be there,” she said.