Army Ranger Lead The Way Fund is thrilled to announce that we are now officially a member of the Tough Mudder Charity Family!  You can now get MUDDY for a GREAT cause and the best part is you can participate in Any Race, Any Place across the country!

By joining Team Army Ranger for your Half Mudder or Full Mudder, you can help us help those who put it all on the line to protect us, our elite 75th Ranger Regiment and their families.

As a member of Team Army Ranger for the TOUGH MUDDER, you will receive some great perks! In addition to awesome Army Ranger Lead The Way Fund racing swag including a hat, light-weight performance running top, racing pinney and more, you get:

Our men are STILL in the fight, coming home wounded, and continue to need our support more than ever. You may not see it on the news but this Global War on Terrorism is still happening.  As always, we thank you for your continued support!Please Email racing@leadthewayfund.org with interest.

For more information about Army Ranger Lead The Way Fund and our upcoming events please visit our website at www.leadthewayfund.org.

Each year, “Regs Rock” honors the life of Manhasset hero, Sgt. James J. Regan (CHS ‘98), who was killed in action in February 2007 while serving with the 75th Ranger Regiment.

All proceeds from the day will go directly to Army Ranger Lead The Way Fund in support of our active duty and wounded elite Special Operations U.S. Army Rangers and their families.

Suggested donation to Army Ranger Lead The Way Fund is $10.00 for Adults 18 and over.

Your Contributions at Work! 2016 Year-End Appeal

Your Contributions at Work! 2016 Year-End Appeal 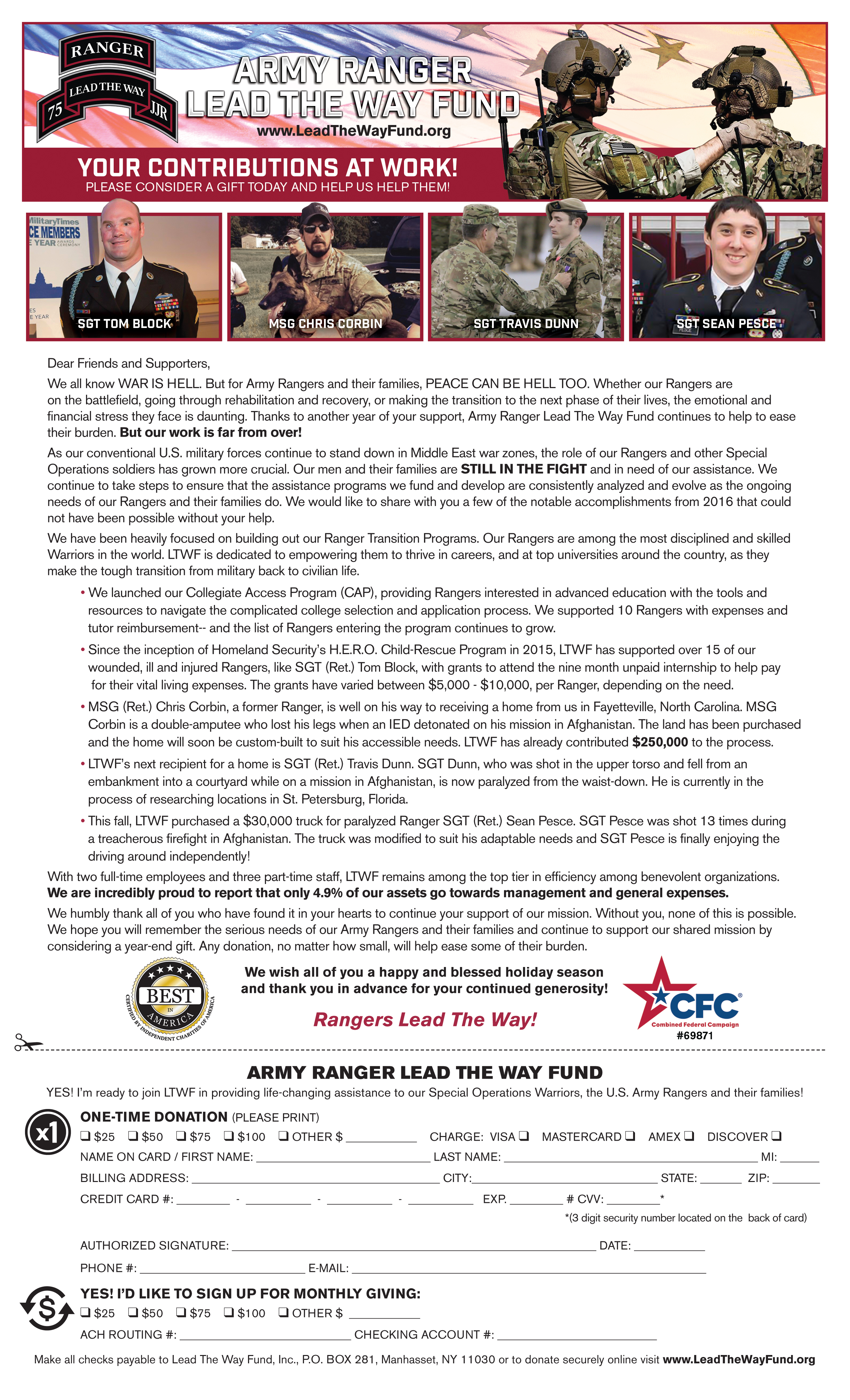 In the past two years more than 20 75th Ranger Regiment veterans have earned admissions to one of the nation’s premier Ivy League schools, Columbia University. Their path and the path of future Rangers is being codified through a relationship developed between the Ranger veterans, Columbia’s School of General Studies, and the Army Ranger Lead The Way Fund.

“All we needed was an opportunity to show Columbia what we bring to the table,” said Myles Grantham, a former 3d Ranger Battalion sniper and current senior political science major.

“Rangers are master integrators,” Grantham continued. “Once the door was opened, our Ranger vets became team players in class and began seeking ways to making the student organizations they joined more effective.”

Key to garnering the support of Ranger application for admissions was gaining support from Dean Curtis Rodgers, Columbia’s dean of its College of General Studies.

“Columbia has always been on the forefront of educating our nation’s military, whether it be our ROTC programs during the World Wars or our focus on actively recruiting transitioning service members,” Rodgers said.

“We have seen the Rangers step on campus and integrate into the academic culture while providing a perspective from their military service that enhances the academic development of our student body,” Rodgers stated.

Ivy League and top institutions such as Columbia maintain stringent admission standards. While service in the 75th Ranger Regiment is a positive mark on an application it is not in and of itself enough.

The Collegiate Access Program provides transitioning Rangers access to Service to Schools for application assistance, attendance at a Warrior-Scholars Project summer seminar for preparation for the academic rigors of top tier institutions, and financial assistance within established policy to assist with logistic costs associated with Warrior-Scholars Project seminar attendance.

“The Collegiate Access Program is a clearly defined pathway that a Ranger can take to ensure the best possible support in gaining enrollment in the nation’s top universities,” said James Regan, Lead The Way Fund founder and Gold Star father of Sgt. James J. Regan.

“When we look at service in the Ranger Regiment, we know our guys have integrated into a very selective organization with high standards,” Regan said. “We need to continue to provide the opportunity for them to lead at top tier institutions; the positive effect for the individual and nation is unmeasurable.”

“Obtaining an advanced education in society is imperative as achieving your Ranger Tab while serving in the 75th Ranger Regiment. The Rangers need to work towards that goal,” Regan stated.

The majority of Ranger veterans at Columbia are former non-commissioned officers.

“The responsibility placed on Ranger Regiment is NCOs is huge, and it has lifelong implications,” Grantham said. “When our Rangers depart the Army, they need to know that they are in demand; but they have to know the processes like the Collegiate Access Program codifies their pipeline to higher education.”

To learn more about the Collegiate Access Program, go to https://www.leadthewayfund.org/programs/collegiate-access-program-cap/.

Disclaimer: This article does not represent Department of Defense or 75th Ranger Regiment endorsement of any non-federal entity included this article.