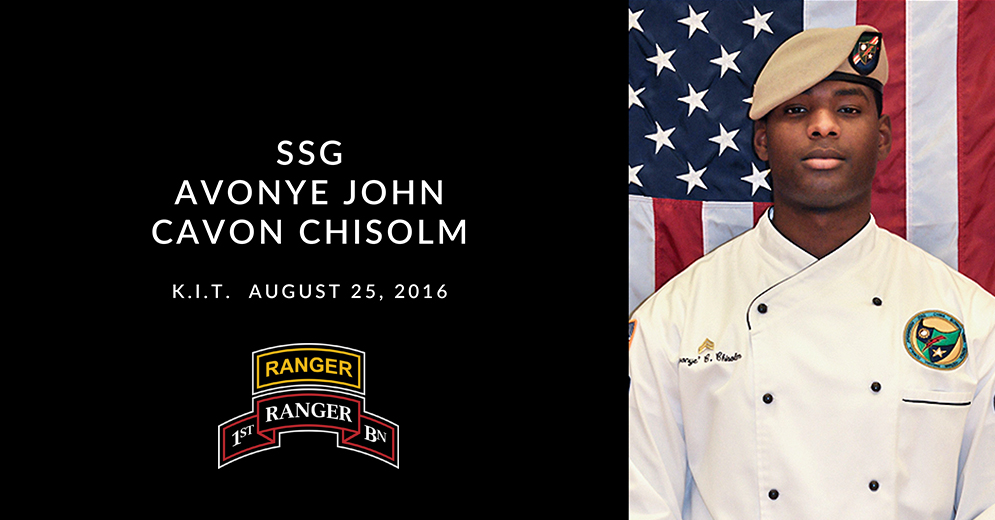 Chisolm sustained serious injuries during the airborne operation; he was transported to the nearest military treatment facility; then air-lifted to Memorial Health University Medical Center, Savannah, Georgia and died August 25.

Chisolm was born August 1, 1990 in Indianapolis, Indiana and earned his General Education Diploma from Fort Stewart Youth Challenge Academy 2007. He enlisted in the U.S. Army in July 2008, attended Basic Combat Training at Fort Jackson, South Carolina and Advanced Individual Training as a Culinary Specialist at Fort Lee, Virginia. After graduating from the Basic Airborne Course and the Ranger Assessment and Selection Program at Fort Benning, Georgia, he was assigned to 3rd Battalion, 75th Ranger Regiment March 2009.

Chisolm transferred to 1st Battalion in September 2013 and served as a Culinary Specialist Non-Commissioned Officer.

He will be posthumously awarded the Army Commendation Medal.

Chisolm is survived by his father Harrell Chisolm of Atlanta, Georgia and his grandmother Celestine Herbert of Charleston, South Carolina.

As a Ranger, Staff Sgt. Avonye John Cavon Chisolm selflessly lived his life for others and distinguished himself as a member of the Army’s premier direct action raid force and fought valiantly as he served his fellow Rangers and our great Nation.

Our Rangers are among the most disciplined and skilled Warriors in the world and we are dedicated to helping them utilize their ingrained skills by empowering them to thrive in careers and at top Universities around the country. Through our Transition Programs, we are committed to helping our Rangers through the reintegration process, ensuring that they achieve their goals of a rewarding and prosperous civilian life.

Army Ranger Lead The Way Fund’s Collegiate Access Program (CAP), in collaboration with our partner organizations, provides Rangers interested in advanced education with valuable tools and resources to help them navigate the complicated process of selecting and applying to top-level Universities.

If you are a Ranger interested in learning more about our CAP program please email CAP@LeadTheWayFund.org.