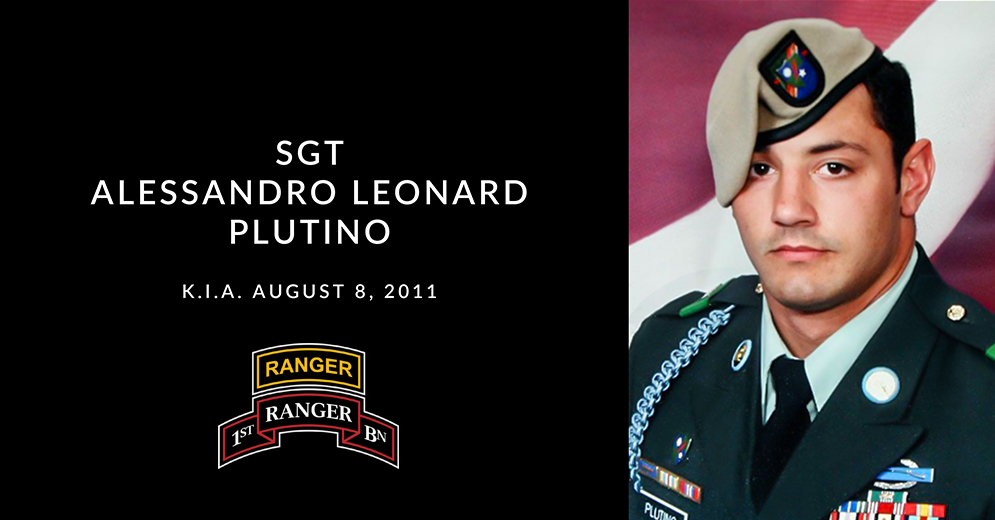 Sgt. Alessandro Leonard Plutino, 28, was killed by enemy forces during a heavy firefight while conducting combat operations in Paktiya Province, Afghanistan. Plutino was a Team Leader assigned to Company B, 1st Battalion, 75th Ranger Regiment at Hunter Army Airfield, Ga. He was on his sixth deployment in support of the War on Terror with three previous deployments to Iraq and two to Afghanistan.

He was born Aug. 23, 1982 in Washington Township, New Jersey. He enlisted in the U.S. Army in August 2006 from his hometown of Pitman, N.J. Plutino completed One Station Unit Training at Fort Benning, Ga., as an infantryman. After graduating from the Basic Airborne Course there, he was assigned to the Ranger Assessment and Selection Program also at Fort Benning. Plutino graduated from the Ranger Assessment and Selection Program and was then assigned to Company B, 1st Battalion, 75th Ranger Regiment in February 2007, where he served as a rifleman, grenadier, automatic rifleman, and a Ranger team leader.

Plutino is survived by his mother Dianne Hammond and his father Sandro Plutino, both of Pitman, N.J.

As a Ranger, Plutino selflessly lived his life for others and distinguished himself as a member of the Army’s premier direct action raid force, continuously deployed in support of the Global War on Terror, and fought valiantly as he served his fellow Rangers and our great Nation.

If the playoff implications of Saturday’s game between the Long Island Lizards and Hamilton Nationals, here’s another reason to attend.  The Lizards will host the Heroes Day to honor the United States Army Rangers. For every ticket sold online, a percentage of the profit will go directly to the Lead The Way Fund.

Joe Horowitz and Lead The Way Fund in Golfing Magazine

The average age on the PGA Tour in 2011 is 32 yrs old. If you’re a believer in statistics, 32-year old Long Islander Joe Horowitz is poised to fulfill a lifelong dream and qualify for the PGA Tour at this October’s PGA Tour Qualifying Tournament (Q-School).

The 2002 New York City Amateur Champ turned pro in 2004 and competed for five long years before breaking through and capturing his first Professional Golf Tournament victory in 2009 at The Goslings Invitational in Hamilton, Bermuda.